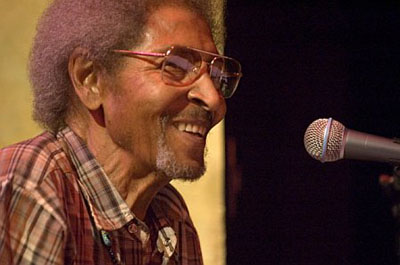 Bobby Sharp, 88, of Alameda, passed away on Monday, January 28. His passing marked the end of a life filled with generosity toward friends, colorful storytelling about mid-century times in Los Angeles, New York, and California, and a long songwriting career highlighted by his 1961 hit, “Unchain My Heart."

Bobby was born in 1924 in Topeka, Kansas, and after spending his early years in Lawrence, Kansas, moved to Los Angeles to live with his grandparents. His parents, Louis and Eva, had gone to New York to pursue career dreams they thought could be realized only in that city, things being what they were in the face of the Depression. His father, a concert tenor, won small roles on Broadway and at the famed Lafayette Theatre in Harlem, the same stage where Orson Welles had produced Macbeth with an all black cast. His mother became active in the National Urban League Guild and a lifelong friend of its founder, Mollie Moon. Then in 1936, at age 12, Bobby joined his parents in New York.

Despite the hardships of the Depression, the family enjoyed a rich cultural life surrounded by people who were making things “happen,” experiences that would later provide a spark for Bobby's songwriting talents. Their home at 409 Edgecombe Ave., on top of Harlem's “Sugar Hill," was a gathering place for prominent figures of the Harlem Renaissance. Walter White, founder of the NAACP, Roy Wilkins, NAACP leader for nearly 25 years, and Aaron Douglas, the Topeka-born father of African-American art, all lived at 409 Edgecombe. Duke Ellington was a down-the-street neighbor. Poet Langston Hughes, Eddie Matthews, who performed baritone in Porgy and Bess, and Thurgood Marshall, then a young lawyer, all were part of young Bobby's extended family. Eva loved to entertain, and with only a hotplate and a few utensils, she somehow managed to host large parties for everyone in their two-room apartment. In those days, Depression or not, people would always get up and sing, and those songs got Bobby interested in music.

Bobby joined the Army in 1943, served in the 372nd Infantry regiment stationed in New York City and Ft. Breckenridge, Ky., and after getting out of the service, used the GI bill to study music, first at the Greenwich House Music school (for the fundamentals) and then at the Manhattan School of Music (for harmony, theory, and piano). His impetus for getting serious about learning the craft had come from family friend and famous bandleader Sy Oliver, who said, “Take lessons," when the 20-something Bobby asked, “How can I learn to do what you do—make real songs and write them down?"

For the next few years, Bobby ran up and down Broadway and Tin Pan Alley, trying to get songs published. He hung out in bars like Harlem landmark Small’s Paradise, meeting other hungry songwriters. He read books and poems—even the thesaurus—as he put down tune after tune.

Then in 1956, he recorded his first commercial success, “Baby Girl of Mine,” which was later covered by Ruth Brown. During the 50’s and 60’s his tunes were recorded by such leading artists as Sarah Vaughn and Sammy Davis, Jr. and, of course, Ray Charles. Bobby also played several gigs with jazz and big band greats Benny Carter and Jimmie Lunceford, and along the way, he worked with a score of famous songwriters—Charlie Singleton, Leslie McFarland, Jerry Teifer, Aaron Schroeder, Mel Glazer, and Dan and Marvin Fisher. Among his many friendships was the one he struck up with novelist James Baldwin when he wrote the song Blues for Mr. Charlie, after seeing Baldwin’s searing Broadway play about race relations in America.

Although Bobby had sold all the rights to “Unchain" in 1963 for a very small amount, he didn't learn till later that he'd been cheated out of royalties from the song. He sued, and seven years later, the courts awarded him judgement. Typical of his generosity, he included a sizable sum from the court settlement to the friend who had tipped him off about the stolen royalties. He renewed the copyright for “Unchain My Heart” in his own name in 1988, one year after Joe Cocker reignited its hit status.

By this time, Bobby had more or less retired from the songwriting business; he'd moved to Alameda, California in 1980 after an earlier short stay in Lafayette, and began working as a substance abuse counselor at the Westside Community Mental Health Center in San Francisco. He retired from counseling in 1988 and didn't give much thought to the music business for a number of years following.

But then in 2005, Bobby got back in the music business again briefly when at age 81 he released his debut CD “The Fantasy Sessions”—playing the piano and singing his own tunes.

Bobby's stories, his bright, “I'm hangin' in there," and years of generosity to friends and strangers alike will be sorely missed.