UK's Jazz FM Vocalist Of The Year Nominee Jazz/Blues Singer/Songwriter Polly Gibbons Poised To Take U.S. By Storm With Release Of "Is It Me…?" On Resonance Records 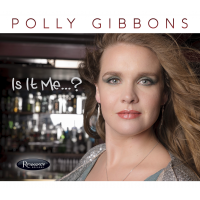 slideshow
Following sold-out tours in the U.K. opening for George Benson and Gladys Knight, including two acclaimed performances at the prestigious Royal Albert Hall, singer/songwriter Polly Gibbons is set to make a British invasion of her own with the release of her highly-anticipated second album, Is It Me…? on Resonance Records on April 21, 2017.

Produced by label owner and founder George Klabin, the 12-track collection fully embraces the inspiring, expansive array of American jazz, soul and blues influences that have infused her dynamic career as an artist and live performer, Polly, who recently was nominated Vocalist of the Year by Jazz FM, has been a staple of the UK Jazz Scene since the mid- 2000s. In commenting on her new album, she states: “It’s a massive melting pot, varied but beautifully linked because I love every style I’m singing. Jazz would never have happened without the blues, which came out of the gospel tradition—and blues is the foundation of contemporary Western culture and pop/soul music, and so on.”

She’s especially excited by the buoyant seven-piece horn section, which enhances both her R&B and big band swing vibes. The piano and most of the arranging are shared by long time-collaborator James Pearson (whom she performs with regularly at the legendary Ronnie Scott’s Club in London, where he is musical director), and Tamir Hendelman, the Israeli born, L.A. based jazz pianist to the stars, including Barbra Streisand and the Clayton-Hamilton Jazz Orchestra.

The album’s set list mines many unusual and unexpected, but supremely cool sources, including three originals she penned with Pearson; “Midnight Prayer” (which earned first place in the singer-songwriter category of the 2014 Indie International Songwriting Contest), “You Can’t Just,” and “Is It Me…?” She opens the album with a vibrant, jazzy twist on “The Ability To Swing,” and brings a bluesy elegance to the hopeful theme of “Sack Full of Dreams.” She taps into the Great American Songbook with “Wrap Your Troubles in Dreams” and Duke Ellington’s “I Let A Song Go Out of My Heart,” a track on which Polly and L.A. studio trumpeter Willie Murillo are showcased.

Different aspects of Americana are captured via the sparsely arranged “Wild Is the Wind” and a lively retro-big band spin through a sizzling Bill Cunliffe arrangement of “Basin Street Blues,” a song she had recorded on her first demo at the age of 18. Additional tracks include “Pure Imagination” (from the 1971 film Willy Wonka & The Chocolate Factory); and the bold and soaring seduction she brings to Aretha Franklin’s classic “Dr. Feelgood..” The collection’s final track, the soulfully swinging “Don’t Be On The Outside”—is officially a bonus track on the CD. As the only live track on the collection, it has a unique flavor all its own that sets it apart from the 11 studio tracks.

A farmer’s daughter who grew up in Framlingham, a small market town in Suffolk, England, Polly is one of seven siblings in a family that shared all types of different musical loves. Her mum cherished classical and choral music (Bach, Mozart, Chopin), her dad was an electric bassist who played in bands in the '70s, her brothers loved R&B and her sisters were all vinyl collectors listening to everything from hip hop and soul, to jazz and folk.

Polly took obligatory piano lessons at age four, but didn’t realize she could sing until she was around 13. Participating in a local music workshop, she met British singer Ian Shaw, who took Polly under his wing and secured her first gig in London when she was 17. Participating in other workshops, she cultivated her talent with bassist Gill Alexander, Jacqui Dankworth (daughter of Cleo Laine) and later, James Pearson. She released her critically acclaimed UK debut album My Own Company in 2014

With the release of her U.S. debut on Resonance Records, Many Faces of Love, in 2015, Polly began making her mark performing in the U.S. with critically acclaimed shows in Florida, Boston, Minneapolis, Kansas City, Oklahoma City, Los Angeles and Birdland in NYC.

Polly’s road now leads her to one of those extraordinary places with the release of Is It Me…? The album is a journey all its own—a culmination of so many moments that also signifies a meaningful new beginning for both the singer and contemporary jazz. Polly will be taking to the road in the U. S. in conjunction with the release of the album. Performances are scheduled in Cincinnati, April 18—Bromwell's Harth Lounge; Cleveland, April 19—Nighttown; Milwaukee, April 21—Sharon Lynne Wilson Performing Arts Center; Chicago, April 22—Winter's Jazz Club and New York City, April 25 at the Iridium.