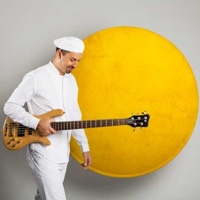 Raja, a dynamic electric bass virtuoso and groove aficionado, with his band the Shez Raja Collective has previously released four highly-acclaimed albums, as well as performed headline dates across the UK and festival appearances around the globe, amassing a dedicated following and forging a reputation as one of the most entertaining live acts on the scene today.

“Collaborating with Randy and Mike has been an incredible and enlightening experience. I'm so grateful for the passion and sensitivity that they've so generously contributed to this album." said Raja. “This recording represents a major milestone on my journey as a musician and I'm overjoyed with what we've created together as a band."

Shez Raja was born to an Indian father and English mother in Liverpool, England. Classically trained on the violin from the age of 9, he traded the instrument in for the electric bass aged 13 and hasn't looked back since. Educated at Leeds College of Music, Raja toured the UK with groups such as Elephant Talk and Loka (signed to renowned label Ninja Tune), before becoming a highly sought after session musician, touring with platinum selling hip-hop artist MC Lyte.