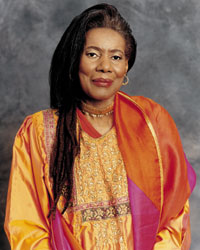 LOS ANGELES&#151A host of jazz luminaries and some of modern music's most exciting artists gather on the Royce Hall stage Sunday, December 5 at 7 p.m. in honor of the legendary Alice Coltrane.

This tribute performance was borne out of Kyp Malone's deep admiration for the music of Alice Coltrane.

“Alice Coltrane's musical and spiritual evolution seem inseparable to me," Malone says. “Her influence reaches incalculably beyond her cult renown and in no way stands in the shadow of her husband's fame. If it weren't for her, I probably wouldn't be playing music in the manner in which I do. She's inspired me as much as any one artist."

One of the most influential jazz pianists in the 20th century and longtime John Coltrane collaborator. The only still living member of Coltrane's legendary quartet.

TV on the Radio guitarist/co-vocalist/co-writer and Rain Machine ringleader known for his soaring voice and uniquely defiant musical approach.

The dynamic guitarist best known for his work with alt-country heroes Wilco deftly leaps from alt-rock to jazz-rock and beyond.

Dutch drummer who was one of the pivotal figures in early European free jazz.

Saxophone and multi-instrumentalist great who has collaborated with everyone from William Parker to Sun Ra to Thurston Moore.

White is a master violinist who introduced the instrument into the world of jazz rock fusion; Chen is an ethereal vocalist with unmistakable range. Michael toured with Alice in the 1970's as part of the Impulse Record tour and recorded with John & Alice Coltrane on the Infinity album.

Inspirational singer and harpist known for her cosmic world-music vibe. She will be performing on a harp given to her by Ms. Coltrane.

Los Angeles' Flying Lotus (Steven Ellison) challenging and experimental electronica style is evocative of the work of his boundary-pushing relatives. His 3rd album Cosmogramma was released to rave reviews earlier this year.