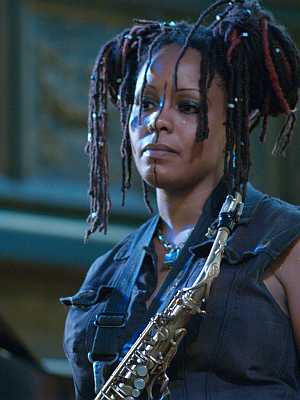 The event marks Matana Roberts' first performance in Ireland. Hailed as the one of the “brightest lights of the new Chicago wave" (The Wire) and an “eloquent, dramatic tone-warping free-jazz artist, right out of Ayler's anti-bebop tradition" (John Fordham, The Guardian), Matana Roberts represents the younger generation of African-American experimentalists. She is a member of the New York chapter of the Association for the Advancement of Creative Musicians and the Black Rock Coalition. Roberts' work traverses jazz, rock, music theater and acoustical engagements with architecture. Coin Coin, a multi-movement “blood narrative" about her family tree including Marie Therese Coin Coin, is widely acknowledged as her most important composition.

Mark Sanders has been heard in Ireland on tour with the great Charles Gayle and William Parker, performing in groups with Paul Dunmall, and with Paul G. Smyth and Hannah Marshall at the National Concert Hall. In free improvisation and avant-rock circles, Sanders is arguably the most sought-after drummer of his generation. A sensitive and skillful collaborator, he has been called upon by musicians as diverse as Evan Parker, Derek Bailey, John Butcher, John Tchacai, Peter Brötzmann and Jah Wobble.

Han-earl Park teaches improvisation at the School of Music and Theatre, UCC. As an improviser, he is fascinated by the collision of improvisative traditions, ideologies and agencies, engaging on-stage with the high-energy free jazz of Paul Dunmall, avant-rock back-beats of Charles Hayward, downtown ambient noise of Kato Hideki, and, shortly, with Richard Barrett's patchwork complexity and Leo Smith's creative world music.

“I was very excited when I heard that Matana Roberts was to play here! She is undoubtedly one of the brightest voices in improvisation today, and we're incredibly lucky that her first performance in Ireland will be in Cork. The trio with the incredible Mark Sanders and Cork's own musical powerhouse Han-earl Park is going to be pure dynamite. UCC has been a centre for improv for years, but this is going to be one of my top highlights!" says John Godfrey, lecturer and composer at the School of Music and Theatre, UCC.

With a trio representing diverse strands of present-day improvised musics, prepare for a performance that fragments and recombines musical histories, and explores the revolutionary potential of real-time music.

Matana Roberts will also be presenting a talk, 'Coin Coin: a Blood Narrative in Blacks, Browns, Reds and Blues' at the UCC Music Building at 11:00 am on 25 November 2010. The talk is free, and open to the public.

Chicago born Matana Roberts is a saxophonist/composer/performer who works in various mediums of improvised sound and performance, and has been active in New York since 2001. A Vanlier and Brecht Forum fellow, and a 2008 and 2009 nominee for an Alpert Award in the Arts, she has appeared on numerous recordings, and performances worldwide with her own, as well as collaborative, ensembles such as Sticks and Stones, Burnt Sugar, Exploding Star Orchestra, Oliver Lake Big Band, and the groups of Julius Hemphill, Myra Melford, Jayne Cortez, Merce Cunningham and Savion Glover. In 2008, the success of her leader debut, The Chicago Project, led critics to call Roberts “one to watch" (Jazzwise) and “an eloquent, dramatic, tone warping free jazz artist right out of Ayler's anti bop tradition"̦(The Guardian) She has also recorded as a side woman on recordings with a large smattering of influential ensembles.

He is involved in ongoing collaborations with Bruce Coates, and with Franziska Schroeder, long-standing associations with Alex Fiennes and Murray Campbell. Recent performances include Mathilde 253 (Park, Charles Hayward and Ian Smith) with Lol Coxhill, a duo concert with Paul Dunmall, a trio with Kato Hideki and Katie O'Looney, and the performance of Pauline Oliveros' 'Droniphonia' alongside the composer. He has appeared at festivals including Sonic Acts (Amsterdam), the Center for Experiments in Art, Information and Technology Festival (California), dialogues festival (Edinburgh), Sonorities (Belfast) and VAIN Live Art (Oxford).

Sanders has released over 100 CDs, and has performed at numerous festivals across the world.