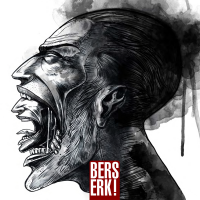 ABOUT THE LABEL - Rare Noise Records was founded in late 2008 by two Italians, guitarist/arranger/producer Eraldo Bernocchi and all-round music nut Giacomo Bruzzo. Located in London, the label was created to present a platform to musicians and listeners alike who think beyond musical boundaries of genre.

The first-ever collaboration between Italian bassist-composer Lorenzo Feliciati and Italian vocalist-multi-instrumentalist-sonic provocateur Lorenzo Esposito Fornasari (aka LEF) defies easy categorization as it awakens the senses. At times darker than the Grim Reaper and heavier than the soundtrack for the Apocalypse, it can turn on a dime and swing insistently, or wail mournfully, or float mysteriously. Is it rock? Is it jazz? Is it ambient, avant-garde, opera or something else? Regardless of tags, the music that Feliciati and Fornasari make together as Berserk! on their self-titled debut stands an imposing manifesto. It is an iron fist upside the head of complacency.

Says Fornasari, “I have never been able to listen to the same style of music all the time so what I prefer is being free to play different things, going back and forth from opera to rock or jazz. That kind of insanity is probably the glue that put me and Feliciati together and actually makes Berserk! possible. And we should also thank Rare Noise Records, which has become a place where a pack of wild fellows, professionals from all over, can meet and do creative things together."

“We exchanged mutual admiration for our music through email," says Feliciati in explaining how the two formidable figures behind Berserk! finally hooked up, “and from there the next step was to get together and play. For me, it is natural to shout, 'Let's do some music together!' when you discover an artist that hits you so powerfully with his talent. And when we finally decided to collaborate, we liked the idea of giving the band a name that immediately gives a sense of power and dedication and brutal resolution."

With the two Lorenzos at the core of this formidable collective, they brought in such potent and provocative voices as guitarist Eivind Aarset, trombonist Gianluca Petrella, alto saxophonist Sandro Satta, keyboardist Jamie Saft, and drummers Cristiano Calcagnile and Pat Mastelotto (Feliciati's band mate in Naked Truth) to enhance the proceedings. Fornasari, also a member of the bands Owls and Obake, described their unconventional method of music-making: “We defined some generic guidelines, though not necessarily in musical terms. The jumping off point for a particular track could have been a color or a landscape or even a word. The resulting product, then, sounds more like a soundtrack CD than a jazz or rock LP."

At the very first stage of recording, Feliciati made a demo of a song with bass guitar and keyboards, then sent it to Fornasari. “I recorded vocals and some orchestration," LEF explains, 'then handed it over to Pat who added drums. Then I sent Feliciati a couple of new tunes. We went on like this, producing a great amount of rough songs as a duo for the first six months of the 2012. Saft, Aarset, Puglisi, Satta and Cavina came in later. We thought something was missing though, thus we planned a 2/3 days of studio session with Petrella and Calcagnile in the fall, just a month before the mixing stage."

“Composing together for us means that we work in constant contact, sharing files and ideas and sending various versions of the song," adds Feliciati. “It must be a very well organized process but I believe it is a way of having a lot of freedom and responsibility on both sides of the creative process."

“First" opens with a gentle piano into with little ambient ear cookies floating in and out of the mix. A sparse, melancholy, spacious ballad, it features some of Fornasari's most expressive singing juxtaposed by Aarset's thrashing power chords and wailing distortion-laced soloing. “Latent Prints" is a showcase for Sandro Satta's urgent alto sax work. This John Zorn-ish avantgarde free-for-all features some intense six-string eruptions by Aarset and an extended bass solo by Feliciati. Fornasari's fierce vocals are positively Satanic here, followed by more ironic whistling at the tag. “Dream Made of Water," fueled by Aarset's sonic six-string onslaught, is highlighted by Fornasari's intensely dramatic vocals which simultaneously border on heavy metal and opera.

A fresh-sounding reprise of “Macabre Dance" is followed by “Clairvoyance," a free jazz vehicle powered by Calcagnile's creative rubato playing on the kit. Feliciati anchors this piece with a bold ostinato on upright bass, recalling the memorizing mantra from John Coltrane's A Love Supreme. Petrella is showcased on some powerful harmonizer blowing on trombone and Calcagnile unleashes at the tag of this potent piece. “Dream Made of Wind," a peaceful meditation for trombone and electronics, recalls some of Brian Eno's ambient works. Petrella loops long tones and blows echo-laden statements on this electronic showcase. “Blow" is dark, conversational encounter between upright bass and alto sax while “Not Dead" is a slow grooving vehicle underscored by Feliciati's upright bass groove and featuring Fornasari's enigmatic vocals. The collection closes with the mysterious, ambient “Dream Made of Water," which culminates in a screaming crescendo of dark catharsis that showcases Fornasari's operatic vocals.

“I never worked with a voice like LEF's before," says Feliciati of his Berserk! partner. “I have done a lot of great pop albums with great singers, but LEF's voice is unique and we treated it more like an instrument in the creative process. So the musical territory we discovered with Berserk! Is something totally different and new." For Fornasari, the music on Berserk! is “the right soundtrack for a night trip through a psychedelic city."

While the dictionary definition of 'berserk' carries a whole string of negative connotations (listed at the top of this page) Feliciati is hoping that his band's self-titled debut will bring a new meaning to the term. “I'd like to think that Berserk! also means a very creative, powerful confusion that at the end becomes creative and powerful music without confusion." Fornasari had something else in mind. “I think the cover of this first album is pretty much self explanatory," he says. “We had that picture in mind when we named the band — a double-headed monster in act of violently puking rage."