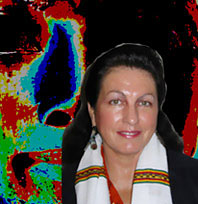 Susana Abreu's singing career began in Caracas, Venezuela, at the age of 13. It was at this age that she started singing with Latin band: Son Tropical. From there on, she began singing everything from folk music to rock and roll while writing her own music and learning to play drums,congas and guitar.By the time she was 15, Susana was playing 4 nights a week at local nightclubs while going to high school during the day. At the age of 22, she had one of the hottest acts in the Caracas nightlife, where people lined up around the block to watch her perform her unique mix of Latin and Anglo pop/rock. She also did back up vocals for famous Latin singers like Venezuelan artists Frank Quintero and Kiara, and Puerto Rican singer Johnny Rivera. She also opened a concert for the amazing well known Venezuelan band: Guaco. In 1998 Susan immigrated to Canada. There she played in and around Vancouver while getting her degree in Psychology from UBC. In December 2004, she releases her debut album: LATIN ROOTS, a collection of her own lyrics and music. Susana has continued to pursue her passion in music. Here in Canada, Susana has had the opportunity to share the stage with legend virtuoso trumpet Arturo Sandoval. She has also performed with Juno Award winner Adonis Puente and several well accomplished musicians like Andre Carrasquero, Jose Sanchez, Gilberto Moraux, Karen Graves and many more. Currently, Susana is working on her second solo CD: Eclipse.

Mareya was raised in the vibrant border of Tijuana and San Diego. She started playing with Mexican dance bands at a young age and later studied Jazz under the direction of Mr. Daniel Jackson, one of the West Coast Jazz Legends. She studied also at the Creative Music School in Woodstock but most of her musical instruction came from the streets, the clubs and fellow musicians. She began playing Latin Jazz with the Tambu International Ensemble, moving to Vera Cruz and living later in Mexico City. Returning to the border she was active in the jazz and latin music scenes. She became the musical director and pianist for the Kokopelli Latin Jazz Ensemble and for 10 years worked major venues and festivals in the south west.

In 2003 Turiya began working as a solo artist going first to Juneau Alaska where she performed with Afro-Peruvian Percussionist Antonio Diaz and to Anchorage where she performed with Hector Diaz y su Orchesta Tropical. She moved to Madrid in 2004 and was active in the incredible music scene there. In 2005 she toured Canada based in Toronto. She also toured British Columbia working with Adonis Puentes and Gilberto Moroeax on Vancouver Island.

She is currently touring Canada performing in British Columbia. She recently toured with Adonis Puentes, co-produced and performed in the 1st annual Victoria Latin Jazz Fest and is hosting the weekly Women's showcase and Latin Jazz Jam Session Every Sunday Night at Hermann's Jazz Club.