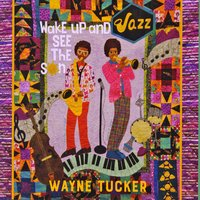 slideshow
The new release from trumpeter/composer Wayne Tucker titled Wake Up and See the Sun (One Trick Dog Records – November 3rd, 2017) is the type of recording that is larger-than-life from blank staff paper to the masterful music that makes it to the final recording. Joined by some of the finest musicians in today’s music scene such as Jason Marshall, Sullivan Fortner, Yasushi Nakamura and Cyrille Aimee among others, Wayne Tucker just plain gets it.

If you love live music that's made with real instruments, then you know that there's no other music like it. It makes you feel good, it makes you laugh, dance, and sing along! Tucker has created a musical collage that was inspired by song writers Stevie Wonder and Frank Ocean, Jazz icons like Miles Davis and Dizzy Gillespie, Composers such as Debussy, and Beethoven, Hip Hop legends including Jay-Z and Nas, as well as incredible new artists like Ambrose Akinmusire and Kendrick Lamar. So, as you can see, this album is a unique blend of Pop music, Jazz, Classical, Hip Hop, R&B, and much more. We always ask for something different that filled with uniqueness and memory. Here it Is! Welcome to Wayne Tucker’s universe.

Wayne Tucker is a 27-year-old Trumpet/Composer/Arranger/Teacher from Syracuse, NY. He is a full-time professional musician based in New York City, and a 2009 graduate of the Jazz Studies program at SUNY Purchase under the direction of Todd Coolman. He has played with many of today's current Jazz stars like Bob Mintzer, Cyrille Aimee and Delfayo Marsalis, pop legend Elvis Costello and even the popular Haitian band Djet-X. He has performed at some of the world’s greatest venues including Avery Fisher Hall, Birdland, Dizzy's Club Coca Cola, The Ravinia Festival and The Kennedy Center. Wayne has also performed at clubs and festivals all over the world in places like Italy, France, Spain, Germany, Greece, Hungary, Colombia, Korea, Martinique and Guadeloupe and The Dominican Republic. He has studied under many great trumpeters including George Coble, Jon Faddis, Scott Wendholt and Jim Rotondi. Additionally, Wayne was a participant in the 2009 & 2011 Betty Carter Jazz Ahead Program, 2009 National Trumpet Competition, 2009 & 2011 Steans Institute, 2005 New York All-State, 2003 Essentially Ellington and more. He can be seen performing around the New York area with many of today's current and up and coming jazz stars.