Trumpeter/Composer Jon Hassell Interviewed at AAJ... And Much, Much More! 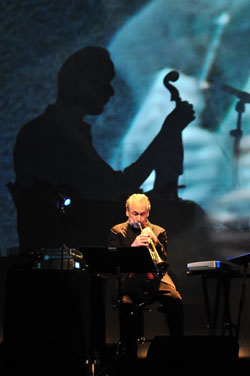 slideshow
He may well be one of the most insidious influences in modern music. Trumpeter, composer and deep thinker Jon Hassell may not have the same name recognition as, say, Miles Davis, but his unmistakable approach to music--he calls it Fourth World music--has affected musicians around the globe, ranging from now friend/co-conspirator Brian Eno, British post-rock crooner David Sylvian and singer/songwriter Tim Elsenburg (aka Sweet Billy Pilgrim), to jazz-centric artists including trumpeters Arve Henriksen, Nils Petter Molv&#230;r and Matthias Eick, as well as guitarist Eivind Aarset, and samplers/producers Jan Bang and Erik Honoré.

This week All About Jazz is providing the most comprehensive coverage anywhere of Jon Hassell and his latest recording for ECM, Last night the moon came and dropped its clothes in the street (2009):

For even more coverage, go to NPR's World Cafe, broadcasting out of Philadelphia, on May 6, 2009, to hear Jon Hassell's live performance and interview. It goes live at 4:00 PM EST and will be archived for streaming so you can tune in anytime.

AAJ strives to provide the most extensive, in-depth coverage on the web, so be sure to check out all the buzz surrounding Jon Hassell at AAJ this week!