One of the aspects that I admire about (Michel) Legrand is his multi-faceted accomplishments. Few musicians can be as successful as a composer, songwriter, arranger and orchestrator, and pianist. --Glenn Makos 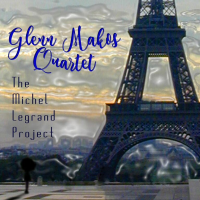 New York based trumpeter and composer Glenn Makos' newest release The Michel Legrand Project with his quartet reimagines the music of Michel Legrand as Legrand celebrates his 85th birthday in 2017. The genesis of the project was the result of a kitchen renovation. “With all of the construction noise in my house, I had a difficult time writing for seventeen people what was then my current project composing for big band. I've always admired Legrand's music and one morning last summer, I woke up and heard his music in my head. It was a quartet, ironically, without a piano, sort of like Ornette meets Legrand." Before his first coffee that day, Makos sketched four Legrand tunes. He then revisited more material from Legrand's film scores, songwriting and jazz projects. “One of the aspects that I admire about Legrand is his multi-faceted accomplishments. Few musicians can be as successful as a composer, songwriter, arranger and orchestrator, and pianist." Makos assembled dynamic alto saxophonist Craig Yaremko, along with bassist Joe Fitzgerald, and drummer Gene Lewin, both veterans on the New York jazz scene.

The Michel Legrand Project with Craig Yaremko and Joe Fitzgerald.

As both a leader and sideman, trumpeter Glenn Makos has performed at New York area jazz clubs, including Birdland, The Blue Note, and The Knitting Factory. He recently released his fourth album on Stop Time Records as a leader with his quartet reimagining the music of Michel Legrand, who turned 85 in February 2017. He is joined by saxophonist Craig Yaremko, bassist Joe Fitzgerald, and drummer Gene Lewin. Other projects as a leader include all original compositions on the album Houston Street, Now and Again, and Lapses In Synapsis, all on Stop Time Records.

A co-founder of the nine-piece group, New Jazz Resolution/ NoNoNonet, Glenn served as a composer and arranger. Among his works recorded with the group, Ellingtonesque: Uptown Suite, Veronica Timpanelli of Jazz Review writes that the piece, “is infused with elegance, spicy world flavor, hot sibilant percussion, and traditional style all rolled into one juicy escapade."