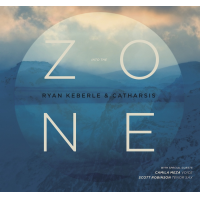 Most jazz musicians avoid repetition dogmatically. But when Ryan Keberle realized he’d been playing the same eight-note phrase in all his recent warm-ups, the trombonist embraced his inclination. “As I started playing it more and more, I realized I wasn’t thinking of anything else,” he says. “You can reach a real state of mindfulness through repetition.” Keberle built the phrase into “Without a Thought,” the complex but gracefully flowing centerpiece of his new album, Into the Zone. It’s his first for Dave Douglas' Greenleaf Music—and arguably the most personal document yet from a trombonist and bandleader better known for his soloist role in famed large ensembles.

On Into the Zone (which features the smoky vocals of Chilean singer, Camila Meza) Keberle uses mindfulness and Zen philosophy as techniques to tune out the noise of that busy career, while accessing something elemental. “The active process of thinking and editing and critiquing is what most often gets in the way of truly great, spontaneous music,” Keberle says. “It’s those moments of spontaneity that are typically most telling of an artist’s true self.”

Keberle wrote the album’s starkly glamorous music with his stripped-down, pianoless quartet, Catharsis, in mind. Internally, Keberle tends to hear his compositions for orchestra, but he loves the clean power of channeling them through just a few instruments. “A large ensemble allows you more control in telling your musical story,” Keberle admits. “But trying to do more with less has actually opened up manifold possibilities. And as a composer-bandleader, it means trying to let go and let the musicians in your band tell the story.” And in a pared-down setting, a side of his playing emerges that’s often easy to miss: his sensitivity, his discipline, the straight-to-the-point evocativeness of his solos.

Much credit is also due to the strong, flexible chemistry of Catharsis, which features Mike Rodriguez on trumpet, Jorge Roeder on bass and Eric Doob on drums. Saxophone great Scott Robinson joins as a guest on two tracks, slotting snugly into Keberle’s arrangements and taking a gripping solo on “Gallop.” Most notable, though, is the fertile divide between Meza’s wordless vocals and the band’s double-brass frontline: It feels blurry, sometimes even invisible—partly because Keberle’s trombone sound has such a fluid, vocal-like quality.

“I equate the human voice with honesty,” he explains, saying he strives to achieve an equally primal effect with the trombone. “It isn’t always going to sing the right note at the right time to the right chords, but that’s part of the excitement, and the value. Regardless of the style or the complexity, when audiences hear a voice they immediately pay more attention to the music”

On the disc-ending, two-movement “Zone,” Keberle starts in dappled harmony with Rodriguez, underneath Meza’s wind-tracing melody. A quarter of the way through, he picks up the melodica. All of a sudden Keberle is playing minor chords with upward angles, building tension and creating a sharp sort of darkness. By the end, he and Meza are laying down an oscillating foundation of harmony while Rodriguez takes a sky-scraping solo that makes the high register feel both irresistible and forbidding.

As a music professor in New York City, Keberle often finds that dedication to refinement can inhibit an artist’s ability to really self-investigate. “In the academic world there’s a lot of music these days that lacks that cathartic element. As the level of proficiency continues to rise, we’re losing some of the human aspect,” he says. “In terms of practicing and learning jazz and acquiring the knowledge you need to be a functional jazz musician, you also have to practice shutting down, and letting your mind go.” With Into the Zone, he has achieved something that’s thoroughly modern, but at the same time raw and ancient.