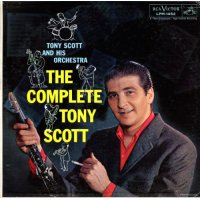 slideshow
June 17 was the 100th anniversary of Tony Scott's birth. The clarinetist, baritone saxophonist and arranger was born in New Jersey and attended Manhattan's Juilliard School of Music from 1940 to 1942. He began recording as a sideman in 1945 before leading his first band backing Sarah Vaughan in '46. He also played clubs with Charlie Parker in the late 1940s and backed Billie Holiday, Carmen McRae, Jackie Paris and other vocalists throughout the '50s. He also recorded extensively as a sideman and leader for Brunswick and RCA during the decade.

In the early 1960s, he toured in Asia and began recorded World music on albums such as Music for Zen Meditation (1964), Djanger Bali : Tony Scott and the Indonesian All Stars (1967), Music For Yoga Meditation And Other Joy (1968) and other albums with musicians from other cultures. In the 1970s and '80s, Scott recorded mostly in Europe after relocating to Europe.

Scott is an acquired taste. While Benny Goodman was about upbeat swing, Artie Shaw played swing with a deep romanticism and Buddy DeFranco played bebop, Scott could swing and play bop but tended to have a dryer-sounding horn, often mixing abstraction into his solos. He also tended to team up with jazz artists who were on his wave length including Bill Evans, Scott LaFaro, Paul Motian, John Carisi, Gunther Schuller, Dick Katz, Jimmy Nottingham and others.

Here's the Tony Scott Quartet playing Everything Happens to Me in 1956...

Here's the Tony Scott Quartet in Sweden in 1957 playing Moonlight in Vermont...

Here's Scott on TV's The Subject Is Jazz in 1958 playing Blues for an African Friend...

Here's Tony playing baritone saxophone on 'Round Midnight in 1973...

And here's Scott in Rome in 1973 with two other Italian masters. First up is Conte Candoli on trumpet playing Darn That Dream, followed by Frank Rosolino on trombone playing Sweet and Lovely and then Scott on baritone saxophone playing Sophisticated Lady. Rosolino and Scott join for a blues and a terrific scat session...