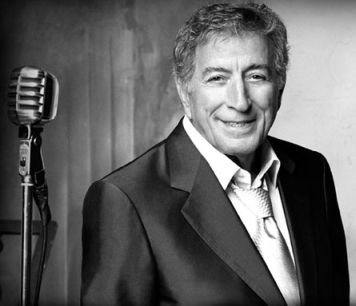 slideshow
On Sunday, June 29, 1958, Tony Bennett appeared on the Steve Allen Show to sing two songs. The first, Young and Warm and Wonderful, had been released weeks earlier by Tony on Columbia and reached #23 on the Billboard pop chart.

The second song is the one of much greater interest. Buried at 1:50 on the following video clip, Tony sings Pennies from Heaven—out on the street with kids (see below).

Bob Waldman sent along the link several weeks ago and we tried to figure out where exactly the endearing clip was filmed. On the show, they try to make it seem as if it was done right outside the stage door of the theater where the Steve Allen Show was broadcast. But that's impossible.

As Bob noted, the Colonial Theater was at 1887 Broadway, at W. 62nd St. As any sharp-eyed New York knows, the street shown isn't Broadway (the one in the clip is a one-way street), and it's way too wide to be 62nd St. or any other one-way cross street. The only business in the clip that's completely evident is an Esso gas station. I tried to see if the New York City maps that Esso printed in the 1950s featured the locations of its stations, but they didn't bother to do that then.

What's clear is that there don't appear to be residences on either side of the street, which tells me it was filmed on the West Side in the high 50s, where many film sound stages were located. Since you can't see illuminated skyscrapers in the background of the clip, I'm also assuming Tony and the kids moved from north to south or from west to east, since north and west would be the darkest backdrops.

If someone out there has a Manhattan Yellow Pages from the 1950s, please look up where Esso Stations were located on the Upper West Side. I'll take a wild guess that this was filmed on Amsterdam Ave. in the low 60s, which had begun to be cleared out by 1958 to make way for Lincoln Center.

As for the children, they're clearly ringers, since they move and perform like Broadway show kids. I did reach out to Tony, but he couldn't recall exactly where Pennies From Heaven was filmed, only that the music back then was a blast: “It was a great era because everyone was performing very intelligent, well-written songs. Steve Allen always had us do the best American music on his shows.