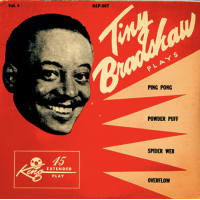 The great migration of the early 1940s by African-Americans from the South to the West and Midwest in search of war-plant work had a profound impact on music nationwide. Young families from the South brought with them a passion for the blues, but once they settled in the urban markets of Los Angeles, Detroit, Chicago and other cities, their tastes shifted from the rural Delta sound to the dance-able boogie-woogie and jump blues.

As jazz fans, we too often think of the musical landscape of the late 1940s and early ‘50s as an alpine range of jazz giants. The truth is R&B was a much larger phenomenon and a more lucrative one for artists striving for slots in the jukebox. As an R&B musician, you didn’t have to memorize hundreds of Tin Pan Alley and jazz standards in multiple keys or learn to improvise. Instead, the blues was fairly straightforward, and all that was required was expression, stamina, riffs and soul.

As the commercial appeal of R&B spread, the market was flooded with honking saxophonists, blues shouters and boogie- woogie pianists. The trend only widened with the proliferation of the 45 in the early '50s. Once you dig into the R&B charts, it’s mind-blowing how many artists there were recording for dozens of independent labels. Not all of these musicians were exceptional, of course, but there were plenty of greats.

Among the best during this period was singer and bandleader Tiny Bradshaw. You don't hear much about Bradshaw today, but back then, his band had a Count Basie-like sense of Super Chief swing. Bradshaw also was a prolific composer and arranger. As the years progressed, the size of his band was reduced, but the number of musicians didn't seem take much away from the band's jump feel, thanks to tenor saxophonists Red Prysock and Rufus Gore.

Born in 1907, Bradshaw began playing the drums, and he worked his first professional job in the early 1930s, after graduating from Wilberforce University with a psychology degree. Relocating to New York in 1932, Bradshaw played in several local bands. In 1934, he formed his own orchestra and recorded eight sides for Decca.

The next time he recorded was in 1944, for Manor, which demonstrates why the independent record label movement following the first American Federal of Musicians recording ban in 1943 was so crucial to the growth of African-American music and R&B in particular.

Between 1949 and 1955, Bradshaw recorded for King Records and had five hits on Billboard's R&B chart. His biggest was Well Oh Well in 1950, but his The Train Kept A-Rollin' a year later would have a more profound impact on the development of rock 'n' roll in the years ahead. Bradshaw's song was covered by Johnny Burnette in 1956, the Yardbirds in 1965 and by Aerosmith in 1974.

Bradshaw's rise in the 1950s was curtailed by a series of stroke. The first in 1954 left him partially paralyzed but he still managed to tour and record in early '58. But additional strokes followed and he died in November of that year. He was estimated to be 51 or 53.

Here's Bradshaw singing with his band on Decca in 1934...

Here's Bradshaw singing with his band in 1947 for Savoy...