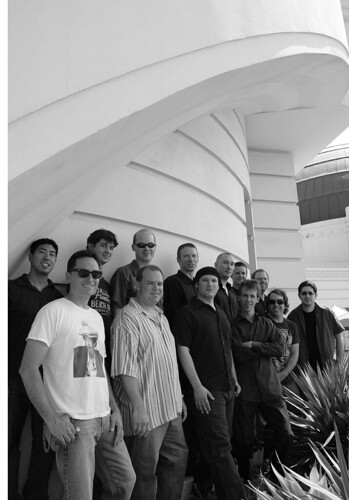 Another Wednesday night brought another boisterous crowd and another round of compelling music. Thanks again to those who made it last week and especially to those of you who made it out for both Wednesdays. Here's what's happening this week:

Saxophonist David Valdez has been living in Portland, Oregon for nearly a dozen years but prior to that he certainly got around, from his hometown of San Francisco to Santa Cruz, off to college in Boston, back to the Bay Area, over to New York, and finally settling in Portland, yet constantly on the move with tours in places like Japan, Holland, Prague, and Istanbul. In his travels, Valdez has performed with an impressive list of players, including Larry Grenadier, Ben Monder, Kurt Rosenwinkel, Ari Hoenig, Donny McCaslin, and Matt Otto, who joins him on this show. Valdez also has another home, albeit an online one. His blog, Casa Valdez Studios is an impressive resource for improvisers and saxophone players, with links to scores of solo transcriptions and technical horn advice, and featuring interesting articles of his own and from around the jazz blogosphere. Valdez's band includes the aforementioned Matt Otto on tenor sax, along with expert guitarist Jamie Rosenn, international bassist JP Maramba, and introducing the talented Tina Raymond on drums, whose brush work alone is worth the price of admission.

One of the main objectives of the Los Angeles Collective is to provide a forum for artists to display their original music, with the hope of encouraging those artists to write and record more music. With the majority of the jazz gigs everywhere being restaurant gigs where the music is an ambient distraction, it becomes hard to justify spending a lot of time working on original pieces that might never find an audience. There is an extraordinay amount of love and care that goes into an record, and that effort should be rewarded with a chance to present it to the public, which is why we are happy to have guitarist Mike Scott perform music from his latest album, Fallen Peach (2011 Jazz Collective Records), A review of this stellar album can be found by clicking here, but in summary the recording is reflective of Scott's heartfelt and positive demeanor, with compelling compositions that are beautifully executed. The two other players on Mike's album will also be performing with Mike on Wednesday, with innovative drummer Jason Harnell providing timely rhythm and organist Joe Bagg (who performed with Anthony Wilson two weeks ago) doing things on the organ that make him the gold standard of organ playing.

We are fortunate to add an amazing guitarist to the final band of the evening. Gilad Hekselman won the 2005 Gibson Montreux International Guitar Competition, thus launching the young virtuoso to jazz stardom, with performances with Chris Potter, Mark Turner, John Scofield, Ari Hoenig and many others, including his own trio with bassist Joe Martin and drummer Marcus Gilmore, who form the nucleus of his latest trio album Hearts Wide Open (2011 Le Chant Du Monde). He will be performing his music at the Blue Whale over the weekend, but in what could be a kind of teaser for that show he has agreed to sit in on a set of Monk tunes in a band that features Matt Otto on saxophone, along with Gary Fukushima on piano, the savvy and always enjoyable Tim Pleasant on drums, and Hekselman's former New School colleague Dave Robaire on bass, who is himself a bonafide star in LA since moving back from New York a few years ago. It will be a rare treat to hear a young master interpret music by one of the great masters of jazz history.