SOURCE: RIFFTIDES BY DOUG RAMSEY
May 10, 2019
Sign in to view read count 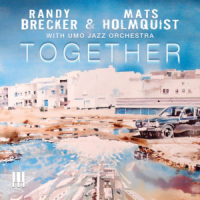 slideshow
We have been meaning to call to your attention to an instance in which–unlike, say, the trade talks between the US and China–international cooperation works beautifully. The trumpeter featured on this album is Randy Brecker, one of the leading American players of the Instrument for more than fifty years. He performs with Finland’s UMO Jazz Orchestra, led by the distinguished arranger and composer Mats Holmquist, who is Swedish. The CD presents three well-known pieces composed by the American pianist Chick Corea. They are “Windows,” “Crystal Silence” and “Humpty Dumpty,” all arranged by Holmquist. The Finnish composer’s own works include “One Million Circumstances,” in which he creates sections that reflect influences reaching from modern classical music back to counterpoint that suggests J.S. Bach. Brecker comes out blazing in his “Circumstances” solo and maintains his initial energy in every piece on the album, and achieves dramatic depth in his flugelhorn feature on Ray Evans’ and Jay Livingston’s 1950s ballad “Never Let Me Go.” Holmquist’s “My Stella” celebrates the birth of his daughter and based on-what else?-“Stella By Starlight.” In his notes, Holmquist refers to “All My Things” as a conceptual piece, meaning that its harmonic structure will remind you of Jerome Kern’s “All The Things You Are,” one of the most honored songs of the twentieth century, if borrowing chord progressions can be considered an honor. In this case, it certainly can be.

Randy Brecker is at the top of his game on this album, impressively supported and complemented by Mats Holmquist and the UMO Orchestra.