The Upside To Releasing Your Music On Cassette 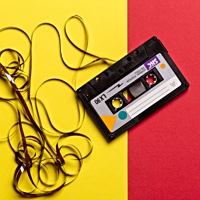 As with so many trends, how we consume music can seem as cyclical as anything else,  as most recently evidenced by the resurgence of cassette tapes. Much like vinyl, this seemingly antiquated format has been making something of comeback of late, and there are a few good reasons why.

Everything that was once old becomes new again. First it was vinyl and now we want to make a case for a medium that quite frankly doesn’t get enough love — the cassette tape.

Now be honest. When you read that title you were flooded with a bit of nostalgia, right? Even if you’ve never really used a cassette to play your music, odds are you have childhood memories of your parents popping in the Twisted Sister Christmas tape or remember wishing your crush would make you a mix tape that held all the best Cure songs

There’s something to be said for those memories and those feelings that we associate with cassettes. And for an emerging band looking to make their mark, release new music, and connect with their fans in a dynamic way (all while spending less than traditional CDs  cost or merch would cost to manufacture), the cassette is the perfect option.

It’s cheap (and you can make small quantities).

Prices will vary depending on which company you work with, but you can make cassettes as low as $1-2 and you can also buy them in small runs. So instead of spending thousands on one album’s production and having tons of CDs lying around for the next 2 years waiting to be sold or given away, you can make as many or as few cassettes as you want.

This means that you can:

As I touched on before, there’s something really comforting about the idea of a cassette tape. It brings to life visions of a simpler, or at least, less chaotic time, in which music consumed us in a completely different way.

If nostalgia is at all a part of your band’s image, the cassette is a no-brainer. But even if it’s not, that doesn’t mean your fans won’t get a kick out of a cassette, especially if it has some highly personalized aspects (more on that below).

Quick tip: Although some of us still have cars old enough to have tape decks, or keep actual physical radios around to leave on for our dogs while we’re gone (just me?), you’d probably do well to also provide a digital download card so fans can love the nostalgia while being able to listen in the modern age.

Their sound quality is just as good as vinyl (and better than streaming).

Tapes, like vinyl, are analog, which means while you might not get that crackling sound you love so much about old vintage vinyls, you will get a uniquely analog sound that strikes up the warm and fuzzies. Plus, it actually will sound better than what you get from the compressed quality of streaming, so if you or your fans are audio heads in any way (or if you just value sound quality) this makes it a really good option.

You can really play with the customization.

To me, this is the real reason to do a cassette — all the incredible DIY options and customizable pieces. When I think of a band doing a DIY cassette, I think of them handwriting the album name on the cassette label, I imagine cute doodles on the case, I think of them writing a “To: Fan” “From: Your favorite band X” There are just SO many ways to customize this and put a real DIY feel to it that can skyrocket the connection you make with your fans.

No matter what your reason, cassettes provide a really affordable way to give your fans something a little different while connecting with them in a new and unique way. It’s fun, it’s different, and it just might help you stand out amidst a sea of CDs.

Angela Mastrogiacomo is the founder of Muddy Paw PR, where her artists have seen placement on Alternative Press, Spotify, Noisey, Substream, and more, as well as the Director of Community and Events for Music Launch Co. Her free training ‘Reaching a Wider Audience Without Spending A Dime’ helps emerging artists cut through the noise and get in front of fans and industry influencers in just a few steps. She loves baked goods, a good book, and hanging with her dog Sawyer.