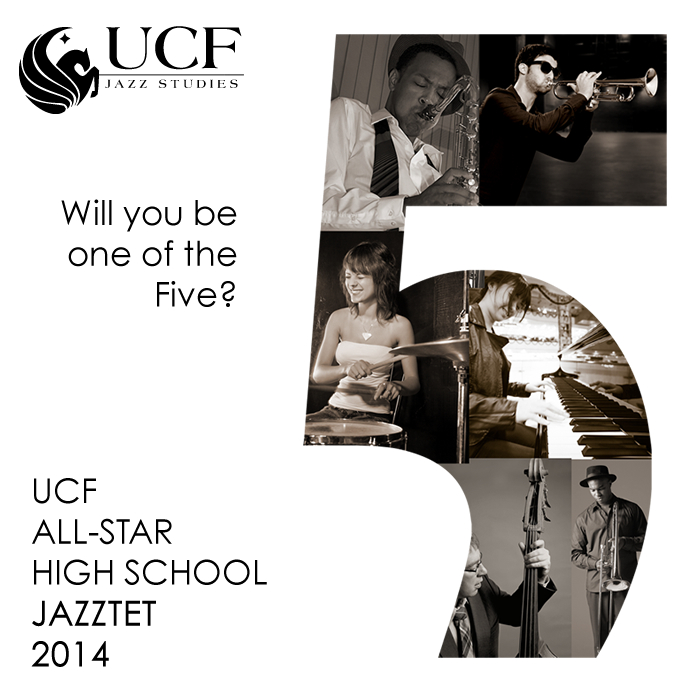 slideshow
Orlando, FL - “It’s the only talent competition of its kind in North America,” Jeff Rupert, Director of Jazz Studies at the University of Central Florida (UCF) said Monday. Five* of the nation’s best high school age Jazz musicians will come to Orlando in March, 2014, to perform with the UCF All-Star High School Jazztet, that will open for the headliners on the opening night of the UCF Orlando Jazz Festival 2014.

Most state and national high school Jazz competitions revolve around Big Band, with 15-18 chairs for performers. With only five chairs*, the UCF All-Star High School Jazztet is the most selective talent search in American jazz music education. The competition was regional for the last few years, and goes national in 2013-2014.

Application for that elite handful of hopefuls opened today, and will close on February 10, 2014.

“Playing in jazz chamber groups is different from the Big Band experience,” said Rupert. In the Jazztet, we have created a unique performance opportunity, where individual students who have played in their own small groups back home can come together, learn how to make that connection in intense rehearsals with our wonderful faculty, and then perform on the kind of short turn-around that they might experience as a professional Jazz musician.”

Those chosen for the Jazztet will have the opportunity to work with the faculty of one of the most progressive and demanding college Jazz music education programs in the country.

Jeff Rupert is the Director of Jazz Studies at UCF, a Yamaha and Random Act Records Artist, Executive Producer of the university’s record label, Flying Horse Records, and the tenor saxophonist of the faculty’s top-10 charting group The Jazz Professors. He has performed all over the world with jazz legends like Maynard Ferguson, Mel Tormé and Diane Schuur;

Marty Morell, (Bill Evans Trio) is a legendary drummer who has played with dozens of the greatest Jazz artists in the world. He is also a top concert and classical percussionist;

Pianist and Yamaha Recording Artist Per Danielsson (The Jazz Surge, Slide Hampton, and Gordon Goodwin) plays with his Per Danielsson. He writes books for Mel Bay Publishing;

Michael Wilkinson is a jazz and classical trombonist, a relative newcomer to the professional Jazz scene in Florida, who received rave reviews from AllAboutJazz.com for his work on The Jazz Professors‘ “Do That Again.” He performed with the Woody Herman Orchestra in 2013.

Who is the perfect student for the UCF All-Star High School Jazztet?

“We’re looking for the most serious young jazz musicians,” said Rupert. “Top players in their states, at their schools, and also in places where there may be someone who is absolutely amazing, but they might be in a place where there isn’t that opportunity to participate in talent showcases.”

The winners will be announced in February of 2014, and many applicants auditions will be available on YouTube and at the competition’s Facebook page.

The faculty screening panel may elect to add additional chairs to the Jazztet if they feel that the talent pool warrants it.