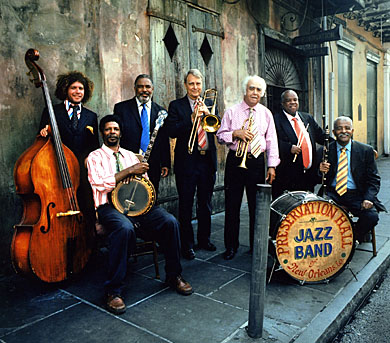 NEWPORT, RI, June 22, 2010 - Of all the acts confirmed for this year's eclectic Newport Folk Festival, perhaps none better personify the 51-year cultural institution than does the New Orleans-based The Preservation Hall Jazz Band, a half-century tradition in its own right.

Under the guidance of founder and producer George Wein, Newport Folk has long The Preservation Hall Jazz Band (Photo Credit: Shannon Brinkman) Preservation Hall Jazz Band ( Shannon Brinkman) been known as the granddaddy of all music festivals. And, as they have done in the past, Wein and co-producers Bob Jones and Jay Sweet have spent a lot of time over the last year getting their hands on the current pulse of the music scene.

Over the years, the development of this goal has led to some of the most interesting collaborations, and most profound moments, in the history of modern music. It's no wonder this year's search led them to New Orleans' famed Preservation Hall, a place where, as Louis Armstrong once noted, “you'll find all the greats."

Wein's own New Orleans legacy as founder of the world-renowned New Orleans Jazz & Heritage Festival, an accomplishment he notes along with the tradition of Newport Folk as the highlights of his career, ensured they did not have to look too far.

Wein's favorite achievements have always been fundamentally connected. He was responsible for bringing Cajun music, and a piece of New Orleans, to Newport over 50 years ago. It's this continuing tradition that made PHJB a natural fit at the Fort. Whether it's been Balfa, Dirty Dozen Brass Band, Dr. John or Ben Jaffe joining Pete Seeger's band for last year's 50th anniversary celebration, the Big Easy influence has always been present at Newport.

“It's fantastic to have The Preservation Hall Jazz Band at the Newport Folk Festival again," said Wein. “They performed in Newport in the early 60's when the band and the festival were first getting started. I met the group's founder, Allan Jaffe, when I first went to New Orleans, years before doing the Jazz & Heritage Festival. Allan was my mentor and guide around the city and through its magnificent cultural history. The band is very much a part of life in New Orleans and it reflects, not only what the city is all about, but what music is all about."

PHJB, much like Newport Folk, has taken a more contemporary approach in presenting the traditional New Orleans sound, recruiting younger players and expanding its repertoire while continuing to hire musicians whose strong links to the Cajun culture assure the music's authenticity.

The combination makes for a multigenerational mix with appeal to a range of musical constituencies, not just aficionados of traditional jazz. Ben Jaffe, current PHJB director and son of founders Allan and Sandra Jaffe, explains, “What we're doing is part of a continuum. Part of a tradition that is now in its fifth and sixth generation."

It's this concept of artistic continuum that makes the bond between Newport Folk and Preservation Hall a very natural fit. As the festival has grown with the passing years, there has been a focus on blending the “old folk" with the “new folk," and the annual lineups and on-site collaborations have not disappointed loyal and new festival goers alike.

The parallels are not lost on members of Preservation Hall - a post-midnight collaboration with Yim Yames of My Morning Jacket, another 2010 Newport Folk artist, at this year's NOLA Jazz Festival ensures that the festival traditions are engrained in the band's history, and leads to anticipation for some exciting performance possibilities at Fort Adams. In fact, James is just one of many Newport Folk artists, past and present, to appear on PHJB's acclaimed collaboration album, Preservation. Others include Andrew Bird, Del McCoury, Pete Seeger, Tao Rodriguez Seeger, Brandi Carlile, Richie Havens, Steve Earle and Cory Chisel.

The Preservation Hall Jazz Band began touring in 1963, under the leadership of Allan Jaffe who had pulled the band together two years prior. Many of the band's charter members performed with the pioneers who invented jazz in the early 20th century including Buddy Bolden, Jelly Roll Morton, Louis Armstrong, and Bunk Johnson.

Band leaders over the band's history include the brothers Willie and Percy Humphrey, husband and wife Billie and De De Pierce, famed pianist Sweet Emma Barrett, and in the modern day Wendell and John Brunious. These founding artists and dozens of others passed on the lessons of their music to a younger generation who now follow in their footsteps, much like the current PHJB lineup - a concept that very much embodies the mission and direction of the Newport Folk Festival.

After kicking off with Steve Martin & The Steep Canyon Rangers, Tim O'Brien and Sarah Jarosz on July 30 at the International Tennis Hall of Fame at Newport Casino, the 2010 Newport Folk Festival continues July 31 and August 1 at Fort Adams State Park. Tickets and more information are available at newportfolkfest.net.

All tickets are available in Newport at the festival office at Empire Tea & Coffee, 22 Broadway (Tuesdays and Fridays Noon - 4:00 pm, Thursdays 2:00 - 7:00 pm and Saturdays 10:00 am - 1:00 pm); general admission tickets for Fort Adams State Park concerts also are available at the Newport Visitor Information Center, 23 America's Cup Avenue. Festival tickets are available on-line at www.ticketmaster.com or by telephone at (800) 745-3000; service charges apply. For general information, craft vendor information or to leave a message for festival staff, call the festival hotline at (401) 848-5055. For complete festival information, log on to newportfolkfest.net