The Lex Golden Octet in Hi-Fi 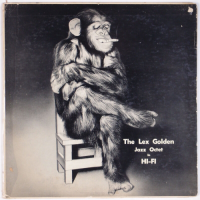 Octets were all the rage in the 1950s. Dave Pell pioneered the format in 1953, and nearly every major jazz player in the city put one together, including Bill Holman and Lennie Niehaus. The reason octets were so popular is they were as close as you could get to forming a big band without going broke. An octet gave you enough instruments to deliver a well-rounded assortment of counterpoint. They also were an ideal size to play colleges, dances and other events when studio work slowed.

Lex Golden also recorded with an octet. Lex who? Golden was a leading studio trumpeter in Hollywood in the 1950s. He was called in for movies, TV shows and was under contract to Republic Studios as first trumpet and soloist. He also played the same positions with the Victor Young Orchestra. As a result, Golden knew all of the top players and arrangers in town and kept them busy when they weren't working, playing in his hotel dance bands.

His first and only jazz album was The Lex Golden Jazz Octet in Hi-Fi, recorded for Superior at Capitol Studios in April 1957. The album can be found on Fresh Sound's “Rare and Obscure Jazz Ablums" series, teamed with Bob Keene's Solo for Seven, also from 1957.

The musicians on the Golden date were solid players, and the arrangers were testament to Golden's reputation and friendships. His octet featured Lex Golden (tp), Pete Carpenter (tb), Abe Most (as, cl), Gene Cipriano and Lester Pinter (ts), Ray Sherman (p), Ray Leatherwood (b) and Richie Cornell (d).

Here are the tracks and the arrangers: Eager for more information on Golden, I searched through a database of newspapers. Golden's ink came largely in the form of ads for New Year's Eve bashes at the Los Angeles Ambassador Hotel and the Statler Hotel. He also surfaced in publicity write-ups of award ceremonies and private club galas.

As for the octet album, Billboard wasn't in love. In June 1957, a Billboard reviewer wrote, “A relaxed quiet jazz aura surrounds this package, tho there's not enough substance to warrant heavy sales. Golden, a vet studio musician, comes thru with some fine trumpet passages, tho he's not facile enough for serious moderns."

Maybe so, but Billboard missed the mark. The album is a wonderful octet workout, with imaginative, swinging arrangements and solid solos in the West Coast jazz vernacular. Golden wasn't on the date to show off chops. It was a playing job, which the octet did well with expression and jazzy smoothness. The solos also are just right. Perhaps the only dud is Victor Young's Passepartout, probably because I can't listen to it without thinking of La Cucaracha. Otherwise, the album is a joy from start to finish.

JazzWax clips: Here's Llama's Mama. Ignore the personnel listen on the embedded covers below. The person who uploaded the music used the early cover-design mockup instead of the finished product. I suspect it will be fixed shortly...