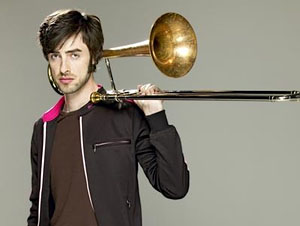 slideshow
On the new episode of The Jazz Session, Jason Crane interviews composer and trombonist Rick Parker. Parker's most recent album with the Rick Parker Collective is Finding Space (WJF Records, 2006). It was named one of the top CDs of 2006 by Michael Ricci, publisher of All About Jazz. Parker sees himself as a composer first, trombonist second. His passion for writing shows on Finding Space, an album of original music by Parker (plus one number by drummer Kyle Struve). Parker won an ASCAP Young Composer Award for the album's second track, “Nervous Energy."

About the show: The Jazz Session

The Jazz Session is a jazz interview podcast featuring conversations with musicians, writers, broadcasters, podcasters and more. The show is hosted by All About Jazz contributor and longtime radio broadcaster Jason Crane. The show is available at thejazzsession.com or in iTunes.

About the host: Jason Crane

Jason Crane was born in 1973 in Lenox, Massachusetts, home of Tanglewood and former home of the famed Music Inn and the Lenox School of Jazz. His professional career has covered a lot of bases -- and a lot of the world. He began as a full-time soprano sax player in jazz, latin jazz and funk bands in Arizona, South Carolina and Pennsylvania. Crane also worked as an on-air host for KUAT (classical) and KUAZ (jazz) in Tucson; as a news announcer for Bloomberg Radio in Tokyo; and as Tokyo business correspondent for NPR's Morning Edition.

After leaving Jazz90.1, Crane hosted the radio and podcast versions of The Jason Crane Show, an interview show about the arts and activism.