"The Insanity Hoax; Exposing the Myth of the Mad Genius" by Dr. Judith Schlesinger is Now Available 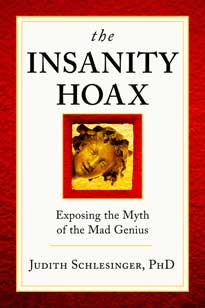 Are you musicians crazy, or just creative? New book provides liberating answers to these old questions

Psychologist, musician, and long-time All About Jazz contributor Dr. Judith Schlesinger has finished The Insanity Hoax; Exposing the Myth of the Mad Genius. Based on thirty years of scholarly research as well as creative and therapeutic experience (but a fun read, by all reports), the book is now available at Amazon.

Creative does not equal Crazy

There's a long-running and cherished expectation that the more creative a person is, the more likely s/he is to suffer from a serious psychological problem, like bipolar disorder.

This notion began with a mistranslation of Plato's “divine madness" and ultimately led to viewing artistic inspiration as a symptom of psychopathology.

In recent decades, many books and articles have claimed to “prove," once and for all, that creativity and madness are automatically linked. In fact, all they prove is how eager people are to believe it, since the research is seriously flawed.

But the negative stereotypes persist.

The Insanity Hoax is the first book to directly challenge the mad genius myth by exposing the pseudoscientific foundation it sits on, as well as the social and psychological reasons for its widespread popularity. The myth is far from being the universal “truth" people think it is.

Based on her thirty years of research as well as creative and therapeutic experience, psychologist Judith Schlesinger tracks the stereotype through centuries of changing history and culture, explaining why it remains powerful despite its lack of empirical support. The Insanity Hoax also reveals creatives' own perspectives about how the artistic life can make a person crazy, all by itself.

A scholarly but entertaining read, The Insanity Hoax is a groundbreaking book that should be read by students, teachers, practitioners, admirers and critics of creativity and the arts; mental health professionals; and especially those who believe that exceptional minds should be celebrated, rather than diagnosed.

Praise for The Insanity Hoax; Exposing the Myth of the Mad Genius