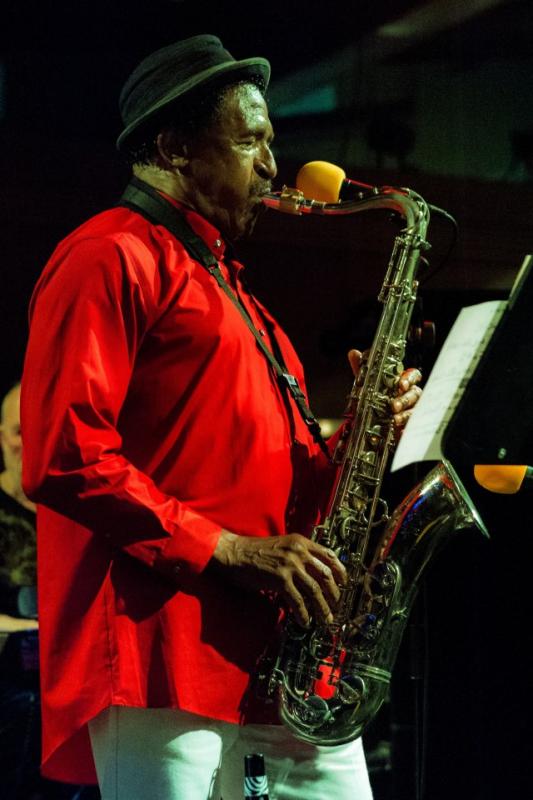 Los Angeles, CA - Having just completed a month long European tour of performances in the CZECH REPUBLIC, HUNGARY, SLOVAKIA, AUSTRIA, GERMANY, HOLLAND, SWITZERLAND, the GrandMothers Of Invention, featuring legendary Frank Zappa Alumni Napoleon Murphy Brock and special guest artist Don Preston, once again will tour America. This time around the ensemble will be performing the ONE SIZE FITS ALL album in its entirety, along with other MOI/FRANK ZAPPA favorites from BONGO FURY, OVERNITE SENSATION, ROXY & ELSEWHERE, UNCLE MEAT and WERE ONLY IN IT FOR THE MONEY!

Says Napoleon, “If you liked last year's tours of us performing the entire 'Roxy & Elsewhere' album, you will really have fun this tour, because we are doing 'One Size Fits All' in its entirety! (Which includes both German and English versions of “Sofa”) The difference between the GrandMothers Of Invention performing last year's 'Roxy', and this year's 'One Size Fits All', is that the original lead singer for both albums is the same lead singer performing these songs live on stage. This is NOT a tribute band! The GrandMothers Of Invention is the ONLY band currently playing the music of Frank Zappa with two of the original members of the Mothers Of Invention. Come on down and sing along if you know the words!”

Says Don, “This tour will be quite an adventure as we will be performing the entire 'One Size Fits All' CD. 'Inca Roads' is one of Zappa's best efforts in music writing along with the other songs on that CD, and the band is ready. This band is the tightest ever! Of course that includes the songs that Napoleon recorded with Zappa like 'Andy', 'Florentine Pogan' and 'Sofa #2'. Of course I will have some surprises that are just too weird to reveal here.”

The GrandMothers of Invention are the only Frank Zappa/Mothers of Invention alumni who have been consistently performing the music of the maestro since 2003. From the classic 'Freak Out', 'Absolutely Free', 'We're Only In It For The Money', 'Uncle Meat', and 'Burnt Weeny Sandwich' and 'Weasels Ripped My Flesh', to 'Apostrophe', 'The Grand Wazoo', 'Overnite Sensation', 'Roxy & Elsewhere', 'Bongo Fury' and 'One Size Fits All' - they have performed on a very long list of classic Frank Zappa & the Mother's of Invention's albums, movies and other projects.

Says the press: “Rare are the musicians who can even play Zappa's music, let alone make it live and breathe. So Thank the Lord for the GrandMothers of Invention.”...“With two different Zappa eras represented, the GrandMothers have a wide palette of material to choose from.”…“They served up vintage psychedelia - rock songs with surreal lyrics, jazz-like harmonies and melodic complexity, with flashes of wacky satire.”...“Amazing virtuoso musicians, fun and funny.”

The GrandMothers Of Invention are:

The GrandMothers Of Invention Tour Dates: