SOURCE: ISABELLE DECONINCK
May 16, 2017
Sign in to view read count 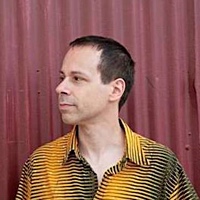 Balassi Institute–Hungarian Cultural Center in New York and the Los Angeles County Museum of Art (LACMA) are pleased to present a double bill featuring leading experimental composers with Hungarian roots, who perform music inspired by Hungarian-born avant-garde painter and photographer, László Moholy-Nagy. The first bill brings together prominent innovators from different corners of new music – jazz trombonist and stalwart of the Hungarian neo-avant-garde László Gőz, composer György Kurtág Jr., and cimbalom extraordinaire Miklós Lukács – in performance complemented by opto-acoustic projections. The second part of the concert is devoted to maverick composer Lukas Ligeti, whose acoustic and electronic works have been shaped by the Bauhaus’ sense of equilibrium and playfulness, while synthetizing influences from Downtown New York experimentalism, contemporary classical music and traditions from around the world (especially from Africa). This is Ligeti’s first major concert in Los Angeles since he relocated from New York City to the West Coast to teach at UC Irvine (2015).

The concert is offered in conjunction with Moholy-Nagy: Future Present, the largest U.S. retrospective since the 1960s on the art and legacy of radical and restless innovator László Moholy-Nagy (1895–1946), on view at LACMA until June 18, 2017. Presented as part of the Art & Music series, the event will take place at the Bing Theater on Saturday, 5905 Wilshire Blvd, Los Angeles, on May 20, at 7:30 pm. Tickets are $25 members & seniors (65+); $30 general admission; $10 students with ID.

The concert focuses on the spirit of the avant-garde, as embodied by Moholy-Nagy, and its relevance to modern and contemporary composers. In a rare meeting, the Gőz-Kurtág-Lukács Trio will spin an overview of the Hungarian electronic classical music scene that carried the torch of innovation during the repressive decades of state socialism (1960s-70s) – building a spiritual bridge between Moholy-Nagy’s experimentalism and the freedom of artistic expression brought about by the end of socialism (1989). Their program kicks off with György Ligeti’s classic Artikulation (composed in 1958 in Cologne, then the epicenter of the German electroacoustic movement), accompanied by Rainer Wehinger’s 1970 “visualized sheet music.” It will continue with composed and improvised works, the notes and sounds of which will generate opto-acoustic signs and animation projected in real time. This visualization is created by Szabolcs Kerestes and the Budapest–based Binaura Collective.

The art of the Bauhaus, particularly Moholy-Nagy with its startling juxtapositions of color fields and axes of symmetries, has been a lasting influence on Lukas Ligeti’s compositional process. Highlights of this program include the West Coast premiere of language: PROUN: music for voice and four instruments, performed by soprano Ariadne Greif and members of the L.A.-based music collective wild Up. In it, Ligeti investigates the rhythms in naturally free-flowing speech, creating new forms of rhythmic perceptions and fresh juxtapositions between the strict and the playful, both key issues for Bauhaus artists. Commissioned by the Balassi Institute, the work was premiered in New York City in August 2016.

Also featured in the Ligeti program is Thinking Songs (2005-2015), a 30-minute tour de force for solo marimba, to be performed by the incomparable virtuoso Ji Hye Jung. Commissioned by a consortium of 16 major U.S. marimba players, this five movement suite explores voice-leading and techniques from different traditions, pushing boundaries to such an extent that, as Ligeti states, “it’s impossible to tell whether we are in some imaginary African avant-garde world or still firmly rooted in the West.” The evening will end with a set by Ligeti’s 7-piece band Notebook, founded in 2009 to explore intersection of composition and improvisation. The ensemble will perform, among others, its signature piece Kaleidoscope Point, featuring polymetric drumming, West African-influenced melodies and exciting approaches to interplay.

LACMA’s Art & Music series is made possible in part by the Colburn Foundation.

László Gőz, Hungarian jazz and contemporary classical artist, professor of music and producer is a well-known studio musician and has contributed to over a hundred albums. In 1996 he founded Budapest Music Center, then in 1998, BMC Records, which has released about a two hundred Hungarian contemporary, jazz, and classical albums up to now. As a musician, his collaborations have included work with Steve Reich, Petr Kotik, Alvin Curran, Chris Newman, Peter Eötvös, György Kurtág, Jiggs Wigham, Carl Fontana, Chris Potter, and Dave Liebman. He was awarded the 2003 Gold Cross of Merit of the Republic of Hungary, the 2008 Chevalier de l´Ordre des Arts et des Lettres (by the French Cultural Minister), the 2015 Knight Cross of the Order of Merit of the Republic of Poland, and the 2015 Knight of Cross from the Order of Merit of the Hungarian Republic.

György Kurtág jr. studied music in Hungary, before joining the team of the Centre Européen de Recherche Musicale in Metz in 1980. He went on to collaborate with Maurizio Kagel, Péter Eötvös and Sylvano Bussotti, as well as participating in the American tour of Pierre Boulez’s Repons while working on music theory and theories of musical movement, as well as innovation in instrument design. With Daniel Kientzy (saxophone) and Frank Royan Le Mee (vocalist) he founded the ensemble Comité des Fêtes. With György Kurtág Sr. he composed the standout Zwiegespräch for “electronic hybrid" string quartet and synthesizer, as well as film scores and a score of diverse pieces while also researching composition. A regular participant at major international festivals, he also remains in the vanguard of innovative musicological research.

Lukas Ligeti is an Austrian/American composer and drummer/improviser with Hungarian roots. Born in Vienna, he lived in New York City for many years and is now assistant professor of Integrated Composition, Improvisation, and Technology at the University of California, Irvine, dividing his time between there and Johannesburg, South Africa. His compositions have been commissioned by the Kronos Quartet, Bang On A Can, and many others; as a drummer, he has performed with many of the foremost musicians of NYC's “Downtown" scene. He performs solo on the marimba lumina, an electronic instrument, and is a pioneer of experimental intercultural collaboration and a co-founder of Burkina Electric, the first electronica band from Burkina Faso. Most recently, he completed a repertoire of music for Burkina Electric and symphony orchestra, premiered with the MDR Orchestra in Leipzig, Germany. Ligeti is the recipient of the 2010 Alpert Award in Music. www.lukasligeti.com

Miklós Lukács is one of the best-known cimbalom players today. His unique style is inspired by contemporary classical music, jazz and folk music from his native Hungary and the Balkans. In 2006, he started his own project, the Lukács Miklós Quintet, and has also composed music for plays, chamber orchestra, solo pieces and concertos for cimbalom. He has performed with musicians including Charles Lloyd, Archie Shepp, Chris Potter, Steve Coleman, Herbie Mann, Uri Caine, Chico Freeman, among others. Lukács has performed as a soloist with several renowned orchestras (Orchestre de la Suisse Romande, the BBC Symphony Orchestra, RAI National Symphony Orchestra, the Warsaw Philharmonic, the Hamburg Philharmonic State Orchestra, the ORF Symphony Orchestra, etc.). His playing is distinguished by a keen sense of musical structure and exploring novel options of playing the cimbalom, making it into a diverse instrument of contemporary music.