‘BeBop’ has in part, taken its bold path of becoming a public company to try to change the way in which the artistic community thinks about Jazz and the arts in general.
—Gregory Charles Royal, BeBop Interim CEO 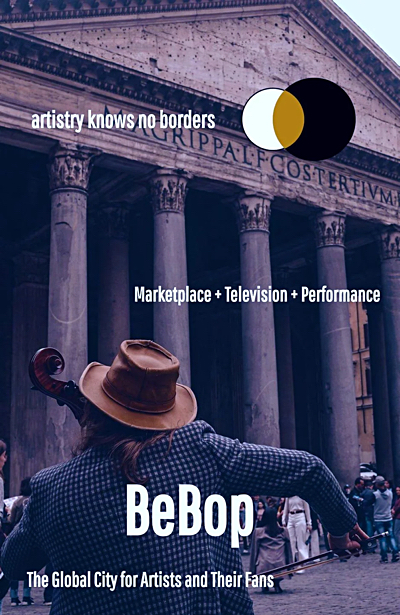 slideshow
The BeBop Channel Corporation (OTC PINK: BBOP), made history earlier this month as the first Jazz public company, giving a Wall Street voice to the world of Jazz – America’s classical music. Many people in the New York area are already familiar with ‘BeBop’ from their programming, including their recent Off-Broadway production God Doesn’t Mean You Get to Live Forever, the New York Jazz Film Festival, and the television series Giant Steps starring the late Mickey Bass and many top New York musicians. ‘BeBop’ has in part, taken its bold path of becoming a public company to try to change the way in which the artistic community thinks about Jazz and the Arts in general: as a thriving industry where patrons can now potentially make money as investors and where artists can expand their options for building businesses and careers.

The BeBop Channel platform is building a home for not only Jazz, but also for Dance, Theatre and Film, and bills itself as The Global City for the Arts where Artistry Knows No Borders.

The company is headed by Co-Founder and interim CEO, Duke Ellington Orchestra alum and Art Blakey protege, trombonist Gregory Charles Royal, who says the concept of a public company is a “dream come true."

“I came up in the '70s and '80s when we were at the beginning of a paradigm shift—when modern tech and computerized music were beginning to push the live musician and artist to the fringes of our society; this shift has continued to today. Jazz, and other high arts forms went from being current and viable to relics. We wanted to do something really big that could shock the world to help make Jazz and the Arts mainstream once again," says Royal.

To that end, the goal of the platform is to consolidate companies, organizations and projects, in the realm of Jazz, Dance, Theatre, independent film, and related products and lifestyles under one roof to accomplish BeBop’s Global City for the Arts mission.

Co-Founder Sue Veres Royal adds, “the opportunities that the capital markets can offer can make what has been hiding in plain site come alive; that is, the sheer magnitude of the sum of all parts of the global arts world—from jazz, dance, and theatre festivals to acting, music and film classes, from equipment and book sales, to television, film, travel and cuisine geared to the Arts supporter. A public company that bridges these segmented, but intrinsically related, communities creates an amplified voice that can get the arts—and artists—their due respect .”

For its next phase, ‘BeBop’ will be seeking candidates to fill out its Board of Directors; the Board will be primarily comprised of corporate and organizational representatives within (or supporters of) the Arts community that meet certain thresholds and requirements; the thresholds and requirements will be published the week of its annual meeting being held on October 27, 2022.

THIS IS NOT AN OFFER OR SOLICITATION TO PURCHASE SECURITIES

These statements are not guarantees of future performance and undue reliance should not be placed on them. Such forward-looking statements necessarily involve known and unknown risks and uncertainties.