SOURCE: ALL ABOUT JAZZ
December 15, 2013
Sign in to view read count 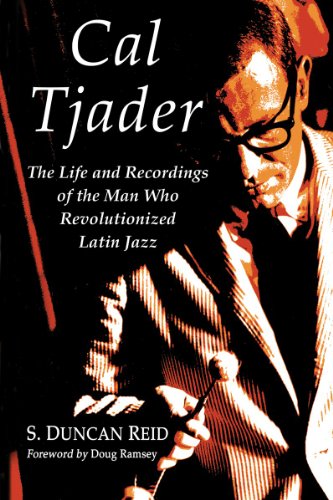 slideshow
The contributions of this late pioneering jazz vibraphonist—composer, arranger and bandleader Cal Tjader have largely been undervalued. This book is a major corrective. The greater part covers the Grammy winner's 40-year professional life, and his explorations of both Latin and jazz music. His personal life is remembered by those who knew Cal best. The extensive research going into this book features many interviews with family, friends and colleagues both in the Bay Area and elsewhere; all the liner notes throughout Tjader's prolific recorded output; and interviews with the man himself, as well as relevant articles and books. An exhaustive discography chronicles all his sessions.

S. Duncan Reid was born and raised in San Francisco. As a youth, he studied the tabla, a set of drums used in North Indian classical music, from Shankar Ghosh at the Ali Akbar College of Music in San Rafael, CA. He was exposed to jazz from an early age by his parents. In the bohemian subculture of St. Louis, his father knew many jazz legends of the 1940s and '50s, such as Lester Young, Charlie Ventura, Miles Davis, Stan Getz and Tiny Kahn. At the same time, his mother was ensconced in the Seattle jazz scene and soon discovered Cal Tjader. When he came of age, Mr. Reid began a lifelong passion for jazz and was honored to have backstage discussions with jazz immortals Gerry Mulligan, Zoot Sims, Shelly Manne, Jimmy Witherspoon and Stan Getz. After studying literature and immersing himself in the Bay Area jazz scene, Mr. Reid became a music critic for the Thirteenth Moon (1994-1996). He has also written for Wax Poetics (2011).