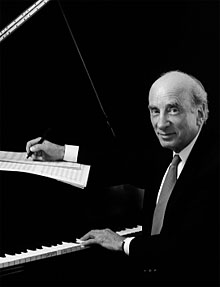 slideshow
Either as a snowbird or a full-time resident, pianist-composer-arranger Dick Hyman has lived 30 miles up the road in Venice for a few years longer than the Charlotte County Jazz Society has existed.

The stars aligned on Monday, February 13, for Hyman to make his first CCJS appearance in Port Charlotte. It was long overdue. And it was also the first solo piano concert that the society has presented in its 27 seasons.

Sitting center stage at the Cultural Center of Charlotte County's grand piano, Hyman explored a wide range of material, adding context for many of the lesser-known pieces. The program ranged from Broadway shows, films and the Great American Songbook to vintage jazz standards, including a few selections from the Duke Ellington repertoire. He even wove in a bit of classical and opera.

In virtually every case throughout the two sets, the New York City native offered extensive variations within his chosen songs without straying from or diminishing the basic familiar melodies. Those variations included stride and boogie-woogie piano styles, as well as some walking bass lines.

Hyman, who wrote the music for 11 Woody Allen films, shared his poignant composition “The Purple Rose of Cairo," the title ballad from the 1985 Allen film.

He told the audience of nearly 400 that he'd play requests only if he knew the tune- and liked the tune. Those requested gems included “Autumn Leaves," Waller's “Honeysuckle Rose," “Tuxedo Junction" and “Misty." Hyman began his take on “Autumn Leaves" with several bars of classical flourishes before shifting to a more delicate jazz feel. The evening's Ellington-related material included Hyman's explorations of Duke's 1933 composition “Sophisticated Lady" and trombonist Juan Tizol's “Caravan," long an Ellington band staple.

Touching on the exotic, he played the aria “Seguidilla" from Bizet's opera “Carmen," followed by Ernesto de Nazareth's “Odeon." He said the Brazilian composer developed a South American parallel around the same time Jelly Roll Morton was popularizing the ragtime in New Orleans. Then Hyman played Morton's “Maple Leaf Rag" in a more Latinized style “as if it came out of Argentina."

There were two other surprises from Hyman's keyboard artistry. The first was a bit of his theme song from the 1960s-early 1970s TV game show “Beat the Clock" (written when Hyman was the show's house organist. The second was the concert closer: a stunning series of variations on “Chopsticks," one of the first tunes that beginning pianists learn. Few musicians ever played it like this rendition.

Hyman turns 90 on March 8 but shows no sign of slowing down. In April, he will be inducted as a National Endowment for the Arts Jazz Master.