The Beatles: Sgt. Pepper at 50 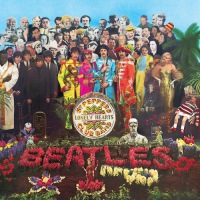 slideshow
Fifty years ago today, Capitol Records released the Beatles' Sgt. Pepper's Lonely Hearts Club Bandin the U.S. Two months later, my Aunt Mary gave me the album for my birthday. Astonishingly, nothing from the album was released as a single for AM radio. At 11, I was a big Beatles fan, but I couldn't figure out what I was listening to or looking at while holding the cover. First, the Fab Four had facial hair and had become adults. I felt abandoned and betrayed. Second, they were wearing what seemed to me to be the uncoolest outfits of all—circus costumes. Third, nothing I heard on the album made much sense. There was a hole, a mind was wandering, Lucy was in the sky, why she had diamonds I had no clue, there was a meter maid, the one and only Billy Shears, Paul was 64, there was a show at Bishop's Gate, a strange Indian song, the album's main song played again and some guy blew his mind out in a car. I listened to the album twice and set it aside, like a bitter piece of fruit. What a relief when the Beatles' Magical Mystery Tour album was released in early November 1967. Equally incomprehensible packaging and messaging, but a welcome return to songs and music that sounded more like the old boys.

Over the years, I came to understand and appreciate the album more. So did you. But I still felt, in the larger scheme of things, that it was candy-coated kitsch, English music hall meets Timothy Leary, a DayGlo action album with music and lyrics spattered about, and a self-indulgent psychedelic trip by a beloved group that listeners were forced to take over and over again when they put on the album. In other words, a self-indulgent bore.

Fast forward to April 28, 2017. That afternoon, I was invited with other music journalists to the McIntosh Townhouse in New York's SoHo to hear the new Sgt. Pepper album stereo remix by Giles Martin, son of the late George Martin, the Beatles' producer. Giles was there himself to play the entire album for journalists and take questions in advance of its release on May 26 (the anniversary of the album's U.K. debut). I settled into a leather club chair in the center of the large vaulted room facing what looked like about $100,000 in McIntosh stereo equipment and speakers.

I put my hands behind my head, slid down in the chair, stretched out my legs and closed my eyes as the album's opening audience chatter began. For the next 38 minutes, the new remixed Sgt. Pepper played undisturbed, from beginning to end. In a hot flash, everything about the once-puzzling and frustrating album came into fine relief and made perfect sense.

Giles's mix was nothing short of astonishing. He used contemporary and 1967 technology for the mix to tease out more of the oddities found on the original mono version (a stereo version also was produced in 1967 but it was one of those quirky affairs, with different vocals and instruments on left and right speakers). Giles also used first-generation tapes rather than their subsequent mixdowns, which produced a clearer and more dynamic sound in the remix. In the process, colors and instruments that had been blurry or buried were teased out. Vocal harmony notes were revealed and the album's bottom was now larger and more pronounced. Hearing the album was nothing short of an awakening unlike anything I'd ever experienced while listening to a rock re-issue.

Mind you, my revelation had nothing to do with the posh McIntosh sound system, since my arm hairs also went up each time I listened to the album on my office stereo system. I think the best way to explain what has happened here is to think of the new 50th anniversary remix as a museum-quality Rembrandt restoration. Imagine a dull masterpiece cleaned with delicate care—leaving the painting's original color palette but removing time's grime to reveal the artist's original intent. The result is a much richer and brighter image and experience. As I mentioned to Giles after his presentation, the album's bass and drums now are so artfully pronounced that one is moved to dance to it.

The more I listened to the remix in my office, the more I realized what a remarkable work the album truly was in 1967, held back only by the era's technological limitations. What Sgt. Pepper lacked in traditional tune-smithing it more than made up for in Byzantine density and expansive studio wizardry. I always felt the album sounded two-dimensional, despite Sir George's best efforts. I also thought it felt dim even in its subsequent digital reissues. Now the album is actually haunting to hear, since the music is so expansive. I found it took me back in time and propelled me forward. It's as if half your brain wants to revisit the past, when you first heard the album, while the other half is pulled forward with the excitement of its futuristic feel.

Listening to the new remix, I came to realize that it's exactly what my mind yearned for in the first place—a dazzling display of gems and the spectacle of watching light play on the facets. This is what you have in the 50th anniversary edition— resplendence and the album's riddle solved. With the collage textures delineated, everything makes sense. As I sat there with my eyes closed, the sensation was like being on an amusement park ride. The soaring vocals were more exhilarating and the sudden instrumental drops were more like stomach-in-throat plunges. An iMax experience for the ears. Finally, Aunt Mary's birthday gift makes sense.

Some highlights to listen for...

Sgt. Pepper's Lonely Hearts Club Band—Ringo's snare strikes, the punch of the French horns on the break, Paul's snarky bass, his vocal harmonies with John, the waspy lead guitar and the instrumental descent and vocal harmony prior to With a Little Help From My Friends.

With a Little Help From My Friends—the textured vocal harmonies ("Are you sad because you're on your own?"), Paul's bending bass line, Ringo's plaintive vocal, and the complexity of the vocal harmony toward the end.

Lucy in the Sky With Diamonds—the psychedelic brightness of Paul's Lowrey organ with a celeste-like setting, the sound of John's terse vocal, the rich density of voices on the chorus, the punch of Paul's bass and the dense carousel quality of the outro.

Fixing a Hole—George Martin's harpsichord, Paul's unhinged bass, George Harrison's lead guitar, and the choral “oohs and ahhs" that fill in the background in the second half.

Being for the Benefit of Mr. Kite!—the play between Paul's bass and Ringo's cymbal, George Martin's swirling harmonium and Lowrey organ, the density of the tape-loops during the wind down and the abrupt stop at the end

Within You Without You—the weightless quality of the percussion instruments: the dilrubas, tabla, swarmandal and tambura, and the strings that were barely noticed before.

When I'm 64—Paul's retro radio vocal, the woody effect of the two clarinets and bass clarinet and Ringo's tubular bells.

A Day in the Life—Paul's piano, John's vocal, the vocal harmonies, Paul's thick bass and the extended last chord that is held until it burns out (only to reappear years later as the booting-up chord found on all Apple computers).

Bonus material—alternate takes and mixes of many of the album's songs, including Strawberry Fields and Penny Lane, which were supposed to be on the original album but were left off and released as a double-sided single instead. They then appeared on the Magical Mystery Tour album.

The new release, of course, comes in a range of configurations (single CD download), the book (by Brian Southall), deluxe (two CDs) and so on. It's also on Spotify. But if you are a Beatles fan and the album has personal significance, my suggestion is to treat yourself and buy the super deluxe edition ($149). Especially if you have a decent stereo system for digital music (there's no vinyl in this set). The Giles Martin re-mix is spectacular but so are the two CDs of bonus tracks and the large,12- inch format book and DVD/Blu-Ray. Just skip that dinner for two at the restaurant you thought was going to be great but will turn out to stink. Use the tab for self-gifting.