Home » Jazz News » Terry Gibbs: Take It From Me

Terry Gibbs: Take It From Me 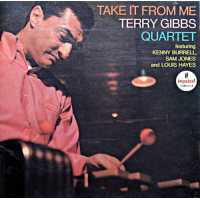 slideshow
Last week I posted on Freedom, a terrific album of Kenny Burrell tracks recorded on two different dates in 1963 and '64. To date, it was never released on CD or as a digital download. What's more, Freedom also is out of print as a 180-gram vinyl release. Well, here's another Burrell album that's very tough to find: Take It From Me, an album led by Terry Gibbs on which Burrell appears as a sideman. As far as I can tell, it was released on CD only in Japan.

Recorded in January 1964 for Impulse by engineer Rudy Van Gelder for producer Bob Thiele, the Gibbs quartet here consisted of Gibbs (vib), Burrell (g), Sam Jones (b) and Louis Hayes (d). The piano-less group featured mostly Gibbs originals: Take It from Me, El Fatso, Oge, Pauline's Place, 8-lbs, 10-ozs and Gee Dad, It's A Deagan. The only soft spots on the album are the two standards—All the Things You Are and Honeysuckle Rose, which aren't nearly as fresh or as exciting as Gibbs's originals.

Thiele told Gibbs he could record whatever he wished and pick his own sidemen. Gibbs went with five originals and two standards. He also picked Burrell, who, like Gibbs, was a composer, technician and multi-instrumentalist. In addition to the vibes, Gibbs could play bass and drums. Burrell coudl double o nbass and could sing. At the time, Hayes and Jones were members of the Cannonball Adderley Quintet.

Take It From Me and El Fatso are cool, mid-tempo swingers, with the latter packing a Latin feel. Oge has church-like soulfulness, allowing the group to sound a bit like the Modern Jazz Quartet. The track's pace gives us a chance to hear Burrell's chord voicings. Pauline's Place is an up-tempo ode to Pauline Rivelli (above), who at the time was editor of Jazz & Pop magazine.

As far as I can tell, 8-lbs, 10-ozs must have been written by Terry to announce the arrival of his son, Gerry, who was born January 15, 1964—a day before this recording session—and who today is a jazz drummer. Gee Dad, It's a Deagan is a flag-waver that runs just over 6 minutes. Based on my research, a Deagan was a brand of vibes and likely the one Gibbs used at Rudy Van Gelder's New Jersey studio.

Hopefully the Impulse division of Universal will re-issue this one, at least as a digital download.

Three of the four musicians on this date are still with us. Sam Jones died in 1981.

JazzWax tracks: You'll find Take It From Me on CD at eBay through vendors selling the release. For example, go here.