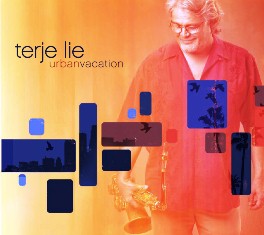 Norwegian-born and now L.A.-based saxophonist Terje Lie ("Terry Lee") is continuing his joyful Urban Vacation with the September 13 release of Dance On The Water. Dance on the Water is the second single from Lie's highly successful and critically acclaimed CD, Urban Vacation (TCat Records), which pairs him with contemporary jazz luminaries Jimmy Haslip and Jeff Lorber, who co-produced the album and also played on all the tracks. “Dance On The Water" further defines Lie's unique musical vibe, whch can best be described as “groove jazz"&#151fun, energetic, and happy.

Lorber, one of the most renowned artists and producers in contemporary jazz and R&B, co-wrote “Dance On The Water" with Haslip, founding bassist of the multiple Grammy-winning jazz-fusion band the Yellowjackets.

On Dance On The Water, beyond the core presence of Lie on tenor saxophone, Lorber performs on electric keyboards, Haslip is on bass, and Tony Moore, who has recorded with Lorber, the Jazz Crusaders, Norman Connors, and a slew of other celebrated artists, takes charge on drums. The tune also features blistering solos from Lie and Lorber, as well as from guest artist Mike Landau on guitar.

Lie says, “Seeing how much work Jimmy (Haslip) and Jeff (Lorber) put into 'Urban Vacation' has definitely inspired me to expect even more from myself as a composer,musician, and performer. It's great to have the opportunity now to share that with more fans than ever before." And he continues, “Jeff and Jimmy enlightened me to many new angles and concepts that made this a fantastic experience for me. It's been a great experience to record with them and the result is a seriously kickin' album!"

Saxophonist Terje Lie began his musical career while still in high school in Norway as the lead vocalist of a blues/rock band, appearing on Norwegian television at only seventeen years of age. Later, he became a part of that country's scene of young rising jazz artists, featured as both a singer and saxophonist. Lie toured Norway, Sweden, and Finland with different groups and appeared on the jazz shows of NRK, the Norwegian equivalent of the BBC. He was also a recipient of a grant from the Norwegian State Fund for Performing Artists.

Lie made the decision to move to the U.S. because his favorite styles of music “were being created in this country 24/7 everywhere." Loving the Southern California climate and being “a certified beach bum," he chose L.A. as his new base.

His first CD, Traveler, was released in 2007. ..."one of the best blend of smooth and straight jazz albums I've had the pleasure of sampling this year," raved ejazznews.com. Jazzweekly.com called Traveler ..."easy, funky and fun."