Tenor Saxophonist Matt Parker Debuts On CD With "Worlds Put Together," May 21 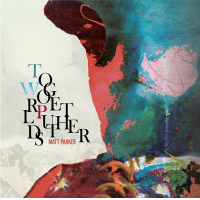 Matt Parker’s debut recording, Worlds Put Together, provides a bracing introduction to the prodigious talents of the Brooklyn-based tenor saxophonist and composer. Scheduled for release on May 22 by Parker’s BYNK label (“Because You Never Know”), the CD assembles a cast of musicians who are leaders in their own right and with whom the saxophonist enjoys deep history on the stage and in the studio.

Among his Worlds collaborators are pianist Jesse Elder, a co-leader with Parker of the Candy Shop Boys; alto saxophonist Julio Monterrey, a musical associate since teenage years with whom he co-leads the jazz band 2s and 4s; drummer Reggie Quinerly, on whose Music Inspired by Freedmantown the saxophonist played; guitarist Josh Mease, a longtime musical partner; and bassist Alan Hampton, who co-produced the CD with Parker. It’s a group that navigates Parker’s classic-cum-modern style exceptionally well.

“As a sideman, I’m used to playing what somebody else wants to hear,” Parker told CD annotator Jay Ruttenberg. “This record was the first time I was forced to play how I wanted to sound. And I surprised myself. I thought I was going to play these songs as I would on my gigs, playing the melody with a nice, pure tone. Instead, I ended up screaming through my instrument. The emotion and playing on the album doesn’t feel neat. I don’t sound calm. I sound like I have an army of people chasing me, and I’m running for my life.”

Starting, for instance, with the Hurricane Andrew–inspired “Eye of Rico” (as a native Floridian, Parker knows from hurricanes). Each of the songs is meant to evoke a scene from an imaginary movie—one with equal parts action and atmosphere; and with the exception of the 10-minute-long “Full Sun,” inspired by Benny Golson and Curtis Fuller, each clocks in at well under five minutes. “Like old 78s,” says Parker.

Growing up in Fort Lauderdale, Matt Parker, 33, was exposed to little jazz. He started out on alto saxophone in the school band, but only because his first choices, drums and trumpet, were already taken. He developed his own system of playing and is very much self-directed.

At 14, Matt attended his first jazz concert, by Maynard Ferguson (in whose band Parker would later play), and was indelibly impressed by the trumpeter’s lyrical playing. Soon thereafter Parker made his club debut playing with local saxophone legend Jimmy Cavallo, and started playing regularly on a scene presided over by Ira Sullivan, Dr. Lonnie Smith, Richie Cole, and Melton Mustafa. The players of Parker’s generation who were making a name in the area included the Strickland twins, saxophonist Marcus and drummer E.J.

In 1999, Parker successfully auditioned at the New School, and he made the move to New York. He spent two years with Maynard Ferguson and his Big Bop Nouveau Band, performing more than 400 shows while touring in the U.S. and abroad. Matt can be heard on the band’s M.F. Horn VI: Live at Ronnie Scott’s.

The one standard on Worlds Put Together, Matt’s striking, refracted take on “Darn That Dream,” is included as a tribute to Ferguson. “Almost every day, Maynard would warm up with this song,” he says. “I’d stand in the hallway and listen, enamored of it. I still hear him playing it.”

Parker admits to always having had “a connection to the avant aspect of expression. My problem was when people said I sounded like I listened to [Roland] Kirk, or Wayne Shorter, I felt like what I had been doing was invalidated. The first time I heard Wayne, I was afraid people would think I was imitating him. I felt like I had to play differently, so I went back to Lester [Young] and Ben Webster and Dexter Gordon. It was a while before I felt confident enough to go back to being myself.”