With his V.S.C. configuration, The Producer's Corner with Spud Too Tight show now has the capability to broadcast Live with celebrity guests over the web featuring HD Video, Stereo Audio and with a unique feature to take incoming calls Live from landlines and cellphones by the viewing audience. 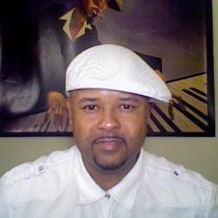 slideshow
Since 2009, The Producer's Corner with Spud Too Tight a highly regarded and one of the first music production and tech talk show podcast has interacted with some of the biggest names in the industry from Billboard chart topping, Multi- Platinum, Grammy award winning music producers, composers, saxophonists, guitarists, bassists, drummers, multi- instrumentalists, recording artists, songwriters, technology experts to industry executives in nearly all genres of music. The show was featured in leading newspapers, magazine outlets and favored on countless blogs with a strong visible online presence for over 5 years. It was historically hosted at www.spudtootight.com

Show Host Spud Too Tight is a passionate gifted prolific keyboardist, music producer, finisher, and sound designer. He is also the inventor of V.S.C. Virtual Studio Configuration an unmatched advancement in technology studio wiring configuration that allows musicians to stream audio directly from any DAW (PC or MAC) or analog setup over the Web in stereo without any feedback or audio looping issues. He was featured in a Spotlight segment on the PreSonus Blog a hardware/software technology leader in the industry.

With his V.S.C. configuration, The Producer's Corner with Spud Too Tight show now has the capability to broadcast Live with celebrity guests over the web featuring HD Video, Stereo Audio and with a unique feature to take incoming calls Live from landlines and cellphones by the viewing audience. This is an innovative breakthrough in social media communications technology for this type of live video podcast format.

The Producer's Corner with Spud Too Tight show will be aired on “Facebook Live" Monday April 10th at 6PM CST making it convenient for fans and followers to watch, interact and call-in with questions for the music celebrities. This week's special guest includes Multi-Platinum Grammy winning music producer, engineer, composer Steve Pageot who has worked with the Queen of Soul Areatha Franklin among other major recording artists. He has an extensive catalog of original music compositions for MTV & VH1 TV shows coupled with radio and television commercials for major brands. His most recent credit is production on the song “Helpless" with Ashanti Feat. Ja Rule off “The Hamilton Mixtap" that debuted #1 on Billboard 200.

About Spud Too Tight

For over two decades his sonic signature sound cornered the market in the Twin Cities as being one of the busiest composer producers creating tracks for upcoming artists, drive time music for Urban and Smooth Jazz radio stations, music for national a documentary centered around one of the recording artists of the famed group Sounds of Blackness to producing music for award winning radio and television commercials, which included a voice-over with Oscar Globe winning Actor, Director & Diplomat Sidney Poitier on Prostate Cancer.

For the past six years, Spud Too Tight has worked with Grammy Platinum Icon Teddy Riley as a sound designer, creating spec tracks and on pre-production New Jack Swing concert music for his global tours. Spud is currently producing music for upcoming projects, is being branded and marketed as a sound designer and composer for film/documentary television music. He will launch the new and technically advanced V.S.C. platform on Facebook Live for The Producer's Corner with Spud Too Tight April 2017.