Tatsuya Nakatani Quartet on 7/23 at Outpost 186 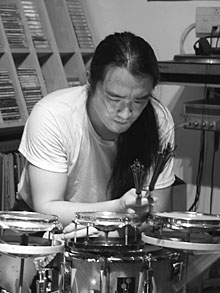 Tatsuya Nakatani (percussion) is originally from Osaka, Japan. In 2006 he performed in 80 cities in 7 countries and collaborated with 163 artists worldwide. In the past 10 years he has released nearly 50 recordings on CD. He has created his own instrumentation, effectively inventing many instruments and extended techniques. He utilizes drum set, bowed gongs, cymbals, singing bowls, metal objects, bells, and various sticks and bows to create an intense, organic music that defies category or genre. His music is based in improvised/ experimental music, jazz, free jazz, rock, and noise, yet retains the sense of space and beauty found in traditional Japanese folk music.

Carl Testa is a composer, bassist, bass clarinetist, and electronicist who has been composing and performing creative music since 2000. He is primarily known as one of the members of multi-instrumentalist/composer Anthony Braxton's Sextet, Septet and 12+1tet. He is featured on the 9 Compositions (Iridium) 2006 box set on Firehouse 12 records, on 12+1tet (Victoriaville) 2007 on Victo Records, as well as the Quartet (GTM) 2006 box set on Important Records. His debut recording as a leader, Uncertainty, features his compositions for clarinets, percussion, string bass, and electronics, which blends chamber music, free improvisation, jazz, and modern electronic music.

Boston area guitarist Kevin Frenette has performed throughout the Northeast USA making music that is inspired by both avant-garde jazz and contemporary improvisation. He studied guitar, composition, and music theory at UMASS-Dartmouth where he received a BA in Theory/Composition. He has performed and/or recorded with such artists as Tatsuya Nakatani, Jack Wright, Joe Giardullo, Daniel Levin, Forbes Graham, Luther Gray, Harvey Sorgen and Dan DeChellis. In 2007, Fuller Street Music released Kevin's first date as a leader: CONNECTIONS. That album featured Frenette with Tatsuya Nakatani on percussion, Andy McWain on piano and Todd Keating on bass.

James Rohr has been wrestling with the piano since the age of 5. Sometimes he tries to play all 88 keys at once, sometimes just a few. He began playing professionally at 14 at a BBQ joint in New Mexico where he played a piano for ribs. In the mid 1990's, James formed a piano trio with Nate Mcbride on bass, and Curt Newton on drums. Together they released three recordings that a few people in Europe and Canada heard. James has had the honor and privelige of playing with many of the great improvisors in the Boston/NYC area. Currently, James is interested in writing and performing songs with his band, the blue ribbons, which he describes as Ray Charles and Johnny Cash meet Captain Beefheart and Sun Ra.