SOURCE: SOMETHING ELSE!
January 26, 2012
Sign in to view read count 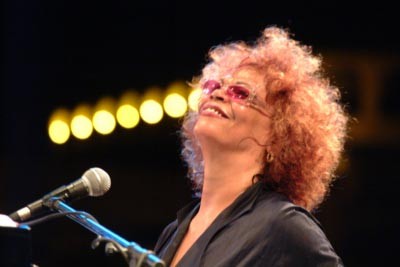 slideshow
One of Brazil's brightest performers of the last three decades, Tania Maria led a band by the age of 13, and has a distinctively exuberant vocal and percussive piano style as part of her wide skill set. An international pop star since the 1980's, she's probably best known for her worldwide pop hit song “Come With Me," but she's also prominent in the world of jazz. She's accomplished enough as a pianist to dazzle even when going on-on-one with a world-class bassist, as she did in the late 1970s on tour with NHØP (the resulting live document, Tania Maria in Copenhagen was finally released in 2005). She's also paired up with Eddie Gomez on live dates, but for her first album of new recordings in about six years, Maria and Gomez combine for a lively, intimate studio foray titled Tempo

Mixing it up with covers and originals, vocals and instrumentals, Maria's passion and personality is laid bare. She gets Carnival-festive on “Sentado A Beira Do Caminho" and “Dear Dee Vee" as Gomez supplies a funky pulse. She shows off her accomplished rhythmic technique on those tunes as well as her own Monk-like song “Yeah Man." Selections like “Estate" and “Bronzes E Cristas" reveal her softer, more sentimental side. Gomez plays the perfect partner, providing his upper register harmonic counterpoint and delivering some lyrically appealing comping on “A Chuva Caiu" and soloing on “Tempo."

In entering her fifth decade as a recording artist, Tania Maria shows no sign of letting up. Her aura still shines through on music made by merely your voice, piano, and Eddie Gomez's bass. Her Tempo is a simple pleasure from a true living icon of Brazilian music supported by a living icon of American jazz.