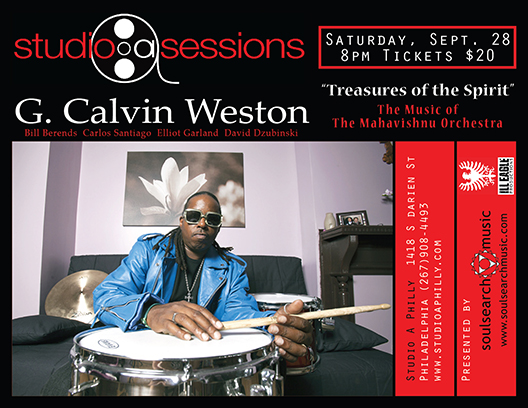 slideshow
Todd Horton's Soulsearch Music with Ill Eagle Productions will present a series of special concert events, called “Studio A Sessions", once a month, beginning this September at Studio A Philly, located in South Philadelphia. These events will be filmed and recorded for future broadcast.

Each concert will feature an artist of exceptional talent and virtuosity. Their stories will be told through their performances and filmed interviews, which will be included as part of the program for broadcast. Think “Sessions At West 54th Street".

G. Calvin Weston, the first artist to be presented, is a legendary drummer and Philadelphia native. He'll be with his group “Treasures of the Spirit" on Saturday, September 28 at 8 pm. They pay tribute to and perform the music of The Mahavishnu Orchestra. Weston's performance resume includes having worked with Ornette Coleman, James Blood Ulmer, Vernon Reid, Jamaaladeen Tacuma, Marc Ribot, John Lurie, George Adams, Odean Pope, Cyro Baptista and many other luminaries of modern music. His playing is nothing short of spectacular and his performances are as exciting as it gets. Treasures of The Spirit includes Bill Berends, Carlos Santiago, David Dzubinski and Elliot Garland.

The second artist presented in the series will be renowned bassist, songwriter and vocalist Francis Mbappe from Cameroon, West Africa with his band FM Tribe on Saturday, October 19 at 8 pm. His New York City based group, with its cross-pollination of jazz, funk, soul and West African music, has been packing NYC venues and performing in festivals worldwide for nearly twenty years. Francis was once bassist for the Nigerian legend Fela Kuti, bassist and musical director for Camerounian star Manu Dibango for nearly ten years, performed with Herbie Hancock and appeared on the renowned “Waka Africa" album with Peter Gabriel, Youssou N'Dour, Salif Keita and King Sunny Ade. After moving to NYC in 1990 he created a revolutionary sound with multiple releases, featuring some of the most exciting and innovative players on the scene.

The third featured artist is world famous Spin Doctors drummer Aaron Comess who will be performing with his own super trio on Saturday, November 16 at 8 pm. Besides being a founding member of the Grammy nominated, ten million plus album selling Spin Doctors, Comess is a brilliant composer, producer and multi-instrumentalist. He is also the owner of His House Studio in New York City. He has played on, written on and/or produced over 200 albums with an acclaimed and diverse roster of artists such as Joan Osborne, Edie Brikell, Marc Cohn, Isaac Hayes, Aaron Neville, Chris Whitley, Rachael Yamagata and many, many others. Comess will be appearing with guitar maestro Teddy Kumpel, who has worked with Rickie Lee Jones, Nine Inch Nails and Marshall Crenshaw among many others. The anchor is bassist Richard Hammond, who has worked with Bono & The Edge, Carlos Santana, Levon Helm, Joan Osborne, Patti Austin and many more. Comess will be performing music from his critically acclaimed solo albums Catskills Cry and Beautiful Mistake, which includes some of his most personal and original music to date.

One of the aims of the “Studio A Sessions" is to help fill a certain musical void in Philadelphia. With an ever-decreasing number of proper venues and opportunities for a large number of world class musicians in many genres, we will be presenting great and affordable concerts while profiling important artists in the world of music, providing a service to everyone.

Studio A Philly, once Metropolis and later Indre Recording Studio, home to WXPN's World Cafe Live, is a full service recording studio and multimedia arts facility. Its 2,500 square foot soundstage is the perfect space for specialized, live concert events. It is fully equipped for anything and everything.