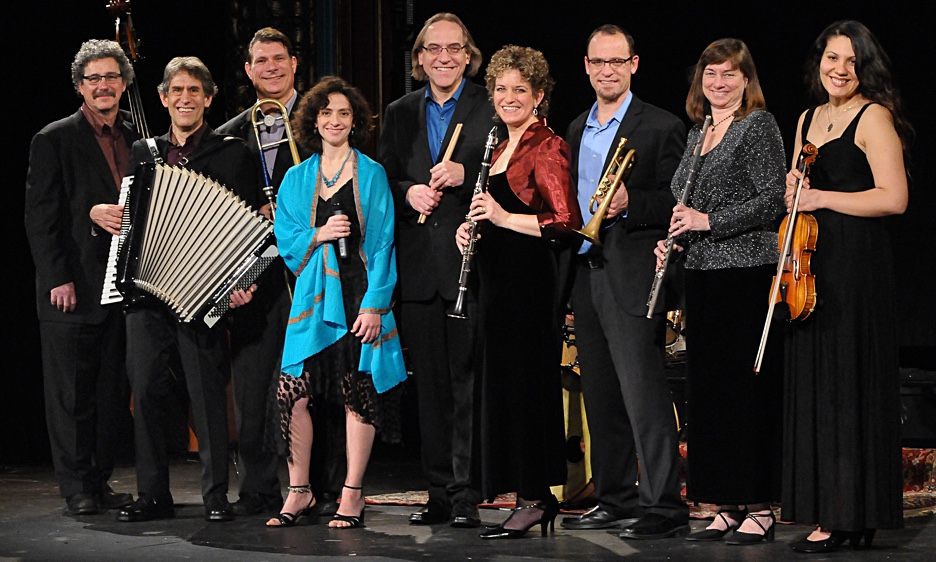 On Sunday, January 24 at 2 p.m. EST, The Yiddish Book Center looks back on the history and evolution of the Yiddish revival with the Klezmer Conservatory Band and the Yiddish Book Center: Forty Years in Yiddishland, a video special celebrating the 40th anniversary of these two enduring institutions pivotal in spearheading the unprecedented international resurgence of Yiddish culture. The event is free and open to the public. It will be presented via Zoom and will stream live on the Yiddish Book Center's Facebook page. To reserve a virtual seat in the Zoom audience—which will allow you to submit questions—registration is required

The broadcast will feature KCB founder and director, New England Conservatory Contemporary Improvisation Department Co-chair and former Yiddish Book Center vice president for education Netsky and Lansky, the Center’s founder and president. It will include an historical overview of the band’s history along with video concert footage from over the years, including excerpts from acclaimed productions including “A Jumpin’ Night in the Garden of Eden” (1986), “The Fool and the Flying Ship” with Robin Williams (1991), and two PBS Great Performances Specials, “In the Fiddler’s House” with Itzhak Perlman (1997) and “Rejoice" (2014) featuring the KCB along with Perlman and Cantor Yitzchak Meir Helfgot. The program will present Netsky and Lansky in conversation with L.A. Times and NPR film critic Ken Turan, along with tribute greetings from well-known KCB collaborators, including Itzhak Perlman and Joel Grey.

Lansky, a MacArthur fellow, is credited with not only single-handedly rescuing the rich world of Yiddish literature from its path toward near extinction in the mid twentieth century but also with making that literature accessible worldwide through the massive digitization and translation projects he launched through the Yiddish Book Center. When the Center began, experts estimated that 70,000 Yiddish books were still extant and recoverable. The Center’s young staff surpassed that number in six months and went on to recover more than a million volumes—some lovingly handed to them by their original owners, others rescued at the last minute from demolition sites and dumpsters. Books have been found in the United States, Canada, Mexico, Cuba, Venezuela, Chile, Uruguay, Argentina, England, France, South Africa, Australia, and other countries around the world. Thousands of additional volumes continue to be collected each year. In 2014, the Yiddish Book Center was awarded a National Medal for Museums and Libraries, the nation's highest medal conferred on a museum or library, at a White House ceremony.

Multi-instrumentalist, composer, and scholar Netsky has been instrumental in transforming the once forgotten Eastern European Jewish instrumental genre known as “klezmer" into one of the most ubiquitous and widely recognized contemporary strains of world music. He is also credited with mentoring several younger generations of the music's best-known practitioners through his Jewish music ensembles and classes at New England Conservatory. In fact, the KCB started at NEC, with informal jam sessions organized by Netsky that developed into a concert ensemble. The original roster featured acclaimed NEC alums including Don Byron, Frank London, Ingrid Monson, and Mimi Rabson. The band achieved quick success, touring internationally, recording ten albums for Vanguard and Rounder Records, appearing in films and PBS specials, and collaborating with acclaimed artists like Itzhak Perlman and Robert Brustein’s American Repertory Theatre. In 1992, the band returned to its roots at NEC for a performance with Joel Grey celebrating the school’s 125th anniversary and later toured with Grey in “Borshtcapades ‘94.”

The Klezmer Conservatory Band and the Yiddish Book Center: Forty Years in Yiddishland will explore how forty years of activism has assured Yiddish literature and music an enduring place not only in the world of Jewish culture but among the world's most cherished cultural traditions. This event is co-sponsored by KlezKanada, Golden Land Concerts & Connections, Yiddish New York, Center for Traditional Music and Dance, the American Society for Jewish Music, Boston Workers Circle, Boston’s Jewish Arts Collaborative (JARTS), and National Yiddish Theatre Folksbiene. The program is made possible in part with the generous support of Peter D. Mark in loving memory of Eugene L. Mark.

The Klezmer Conservatory Band has performed internationally at venues including the Hollywood Bowl, Tanglewood, Ravinia, Saratoga, Boston's Symphony Hall, Avery Fisher Hall, and Radio City Music Hall. They have collaborated with orchestras including the Atlanta Symphony, Toronto Symphony, L.A. Philharmonic, Boston’s Musica Viva and the Florida Symphony. Their ten CD recordings are distributed by Concord Music Group and they are managed by Golden Land Concerts and Connections.

The KCB and the Yiddish Book Center have been celebrating together throughout the histories of both organizations, beginning with the band’s appearance at the Center’s milestone events in Amherst as early as 1981 and continuing more recently with their performances as perennial headliners at the Center’s Yidstock festival of new Yiddish music.