Stratusphunk: The Life and Works of George Russell By Dr. Duncan Heining Available through Amazon Worldwide 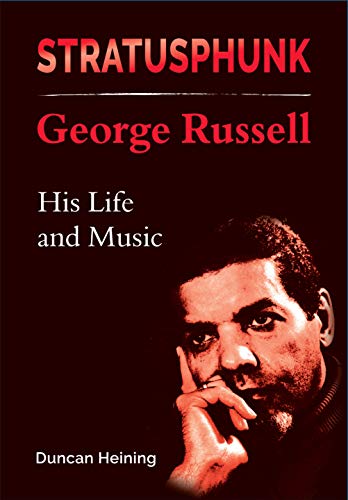 slideshow
Stratusphunk is the story of remarkable musician and a remarkable man. Through his ideas and music, composer, theorist and musician George Russell joins the dots in modern jazz from bebop, though modal and free jazz and into jazz rock. It is hard to imagine another artist, who was both so influential but also so misunderstood. For the first time in paperback and in a newly revised edition, Stratusphunk makes Russell’s story, music and theories available to scholars, students and fans.

Throughout his life, George Russell confronted and overcame the many obstacles thrown in his way of racism, class inequalities and life-threatening illnesses. Widely acknowledged for his influence on the many of the developments in jazz from the fifties onwards, Russell’s impact on the music came from his writings and teaching as much as from his compositions and recordings. His life’s work, the Lydian Chromatic Concept of Tonal Organization (described by Archie Shepp as “the Bible of the Avant-Garde”), fostered the use of modal approaches in the fifties and later, opening up new possibilities for improvisers and composers. His life and work connected with many of the most seminal figures in jazz—Miles Davis, Charlie Parker, Dizzy Gillespie, John Coltrane, Bill Evans, Carla Bley and Ornette Coleman—influencing these musicians and being influenced by them.

His influence spread more widely still during a four-year sojourn in Scandinavia, where Russell proved an inspiration for two generations of musicians such as Palle Mikkelborg, Jan Garbarek, Terje Rypdal and Arild Andersen. From 1969, he taught at the New England Conservatory in Boston, his pupils including Ricky Ford, Marty Ehrlich, Don Byron, Fred Hersch and John Medeski.

Russell’s significance as a composer, as one of the first in jazz to essay the long form successfully, is less often acknowledged. Stratusphunk corrects that omission by focusing in depth on all periods of his career, placing his recordings in the context of his life and theories.

Previous accounts of Russell's career have tended to mythologize both the man and the art, so that he emerges as a shadowy, eminence grise-like figure, simultaneously influential but marginal. Stratusphunk, however, resists such tropes and, instead, presents him as a fully rounded human being actively engaged in all aspects of his life and of the world of jazz. Portrayed in this way, Russell's true significance and ongoing relevance to the music he loved becomes clear.

Originally published in 2009 under the title George Russell: The Story of an American Composer, Stratusphunk offers students and fans of jazz a heavily revised and extended text based on additional research and interviews. Stratusphunk is the biography George Russell deserves.

Dr. Duncan Heining has written about jazz and other musics since 1996 for Avant, The Independent, Jazzwise, Jazz UK and All About Jazz. His other books are—Trad Dads, Dirty Boppers and Free Fusioneers: British Jazz 1960-1975 (Equinox 2012) and Mosaics: The Life and Works of Graham Collier (Equinox 2018).

What the critics said about George Russell: The Story of an American Composer

“Duncan Heining’s full length biography of Russell is a terrific piece of research…The book also grapples with the contradictions and quirks in Russell’s character, and does a commendable job of presenting us with the man.” —Alyn Shipton, Jazzwise

“From this research, Heining has constructed the biography of a great musician and thinker… this is a very readable book, which can be safely recommended for anyone with a love for this wonderful multifaceted form of music we call jazz.” —Dr. Johan Hauknes, Jazznyt, Norway