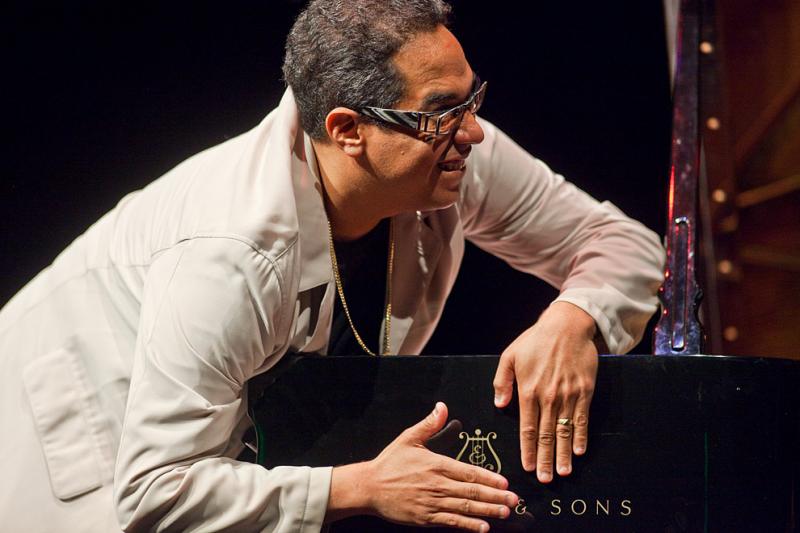 slideshow
Today, our video spotlight shines on pianist Danilo Pérez, who will be in St.. Louis to perform on Saturday, February 27 at the Sheldon Concert Hall.

Pérez, 50, first came to the US from his native Panama in the mid-1980s to study at Berklee College of Music. He initially gained wide attention in this country for his work with the late trumpeter Dizzy Gillespie, and since 2000 has been a member of Wayne Shorter's long-running quartet, recording four albums and touring with the sometimes-enigmatic saxophonist.

As a bandleader, Pérez has released 11 albums under his own name, the most recent being Panama 500, which came out in 2014. He'll be featuring music from that recording during his performance at the Sheldon, and the first video up above, produced for promotional purposes by Pérez' label Mack Avenue Records, provides a brief introduction to the album's concept, which involves combining musical influences from a variety of cultures.

After the jump, you can see some live performances from Pérez' 2014 tour supporting the release of Panama 500 with a band including bassist Ben Street and drummer Adam Cruz, both longtime associates, plus harmonica player Roni Eytan, a nimble melodist who helps give the ensemble a distinctive sound.

From their gig on March 18, 2014 at New Morning in Paris, you can see versions of the album's title composition “Panama 500", “The Canal Suite: Melting Pot", and “Body and Soul", the latter done as a duet between Eytan and Pérez.

After that, there's an excerpt from their gig the following week on March 25, 2014 at Tbilisi Event Hall in Tbilisi, Georgia (the republic that formerly was part of the Soviet Union, not the US state).

The final video is an interview that Pérez did with Detroit jazz broadcaster Brian Pace in 2013, when the pianist premiered some of the music from Panama 500 at the Detroit Jazz Festival.