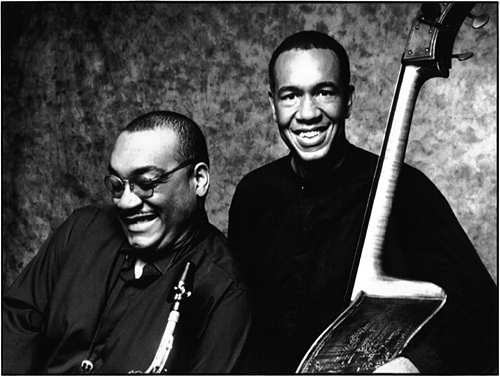 This week, let's take a look at some videos featuring members of the Clayton Brothers Quintet, who will be performing in St. Louis starting next Monday, March 1 through Saturday, March 4 at Jazz at the Bistro.

The brothers also co-lead the Clayton-Hamilton Jazz Orchestra with drummer Jeff Hamilton, a bifurcation of musical efforts that began years ago when the brothers mutually agreed to support each others' preferred musical format. As recounted in their Wikipedia entry, “Jeff's love of small groups lead to formation of the Clayton Brothers Quintet," while John's preference for big bands led to formation of the CHJO.

After more than three decades, the orchestra may have a higher public profile, thanks in no small part to having recorded and performed with popular guests such as John Pizzarelli and Diana Krall, but the quintet has put out eight albums since 1980- the most recent of which, Soul Brothers, came out last spring- and earned generally good notices for them.

Still, for a group that's been around that long, and that even has earned Grammy nominations for a couple of their recordings, there seems to be relatively little video of them available online, while clips of the big band proliferate.. Nevertheless, StLJN has managed to unearth a few videos of the quintet in action previously unseen here, starting with the first clip up above, an excerpt from their show at the 2012 Pittsburgh JazzLive International Festival.

You can see excerpts from two more performances from around that time, recorded in October 2012 at the BMW Jazz Festival in São Paulo, Brazil and at Dizzy's Club in Jazz at Lincoln Center in NYC.

Below that, you can check out solo improvisations from the two Clayton brothers, as John Clayton plays a solo version “If I Were a Rich Man" in April, 2015 at the University of New Hampshire, and Jeff plays a free-form solo while guesting with the Stanford University jazz orchestra in 2011.