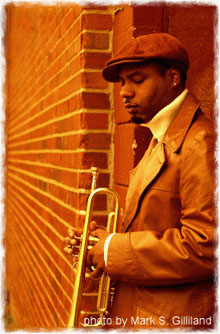 slideshow
Today, let's check out some videos featuring trumpeter and East St. Louis native Russell Gunn, who's bringing his “Blackhawk Revisited" project to St. Louis to perform starting next Wednesday, November 15 through Saturday, November 18 at Jazz at the Bistro.

The word “Blackhawk" in this case refers not to the hockey team, the comic-book hero, or the helicopter, but to the Black Hawk nightclub in San Francisco where Miles Davis in 1961 recorded In Person Friday and Saturday Nights at the Blackhawk, which turned out to be one of the more enduring live albums of his long career.

Since his death in 1991, musicians frequently have paid tribute to Davis by revisiting and sometimes re-imagining music from Kind of Blue, Birth of the Cool, and Davis' post-1967 electric bands. In contrast, this time period- between the recording of KoB and the formation of Davis' “Second Great Quintet" a few years later- has remained relatively under-examined, making Gunn's interest in it that much more notable.

The trumpeter's engagement with Davis' music from the turn of the '60s also gets a significant boost in authenticity from the presence of Jimmy Cobb, the 88-year-old drummer who's the last living participant from the Kind of Blue sessions and will be in the band for Gunn's shows at the Bistro.

So how close do they get to the sound of Miles' band in 1961? You can decide for yourself by checking out today's videos, starting up above with a clip of “So What" recorded in November 2015 at the Velvet Note in Atlanta, with Gunn, Cobb, pianist Kevin Bales, saxophonist Mike Walton, and bassist Kevin Smith.

After the jump, there's a version of Thelonious Monk's “Well, You Needn't"- another staple of Davis' repertoire in the late 1950s and early '60s- recorded at the same gig.

Below that, there are two full sets of the “Blackhawk Revisited" band in action, the first featuring Gunn, Cobb, Bales, saxophonist Morgan Guerin, and bassist Corcoran Holt in October 2016 at Dizzy's Club in NTC's Jazz at Lincoln Center, and the second from the 2015 Atlanta Jazz Festival, with Gunn, Bales, Walton, Smith, and Kinah Botto Ayah in for Cobb on the drums.

Next up are three videos that show Gunn working out on three more tunes associated with Davis- “Solar," “Walkin'" and “Blue in Green"- recorded at various jam sessions in 2017 and 2016 at Churchill Grounds in Atlanta.

Finally, the last video features an interview with Jimmy Cobb, recorded in November 2014 at SubCulture in New York for NYU's Steinhardt Jazz Interview Series, in which Cobb discusses his career, his time with Davis, and other topics.