STLJN Interview: Dan Loomis of the Wee Trio on Recording Live at Jazz at the Bistro 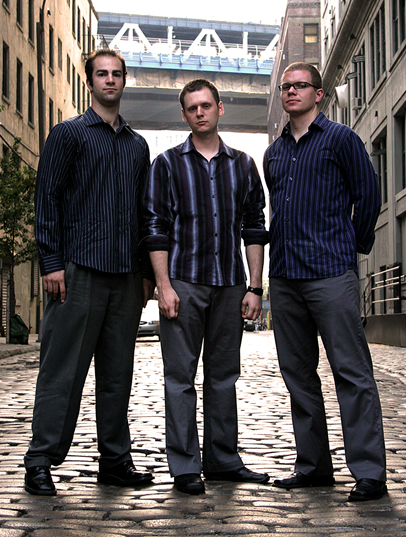 slideshow
As mentioned several times before in this space, The Wee Trio (pictured, top left) are in St. Louis this weekend, performing and recording a live album on Friday and Saturday nights at Jazz at the Bistro.

Though scheduling complications over the past week rendered fruitless our attempts to connect via phone with bassist and St. Louis native Dan Loomis, he was kind enough to respond to a few questions about the impending gig/recording session via email:

StLJN: Your last album began with the idea of exploring the music of a single composer, and after considering various possibilities, you decided on David Bowie. Is there an overall concept behind this recording, and if so, what is it?

Loomis: “The driving motivation behind this record is to capture the live energy of the band. A captivating live experience has always been paramount to The Wee Trio's mission. People often come away from our shows saying, “I don't usually like jazz but I really liked THAT!" So this is our attempt to 'bottle' that, so to speak."

What songs do you plan to record, and who are the composers/arrangers? (Anything else you can tell me about the specific compositions would be good, too.)

“For this record we are synthesizing the musical information from the Bowie record — smart pop sensibility and a knack for making the avant-garde mainstream — and returning with a fresh batch of originals. The band had a chance to rehearse for the second time ever before our California tour this winter. We took the opportunity to add the new tunes to the book and hone the arrangements on some jazz classics that we have been playing for a while. There will be new tunes from all three members on the album."

Why did you pick Jazz at the Bistro as the site to record?

“Jazz at the Bistro is my hometown club. My Aunt Hera used to take me to the opening night of every act that came through. Hearing Ray Brown, Ahmad Jamal, Nicholas Payton, Gary Bartz and so many others live at The Bistro were the most formative listening experiences of my life. Returning there to make a live record is an absolute dream for me. When we decided to make a live record it was the first place that I thought of. (Plus the room sounds great!)"

Who's engineering and producing?

“When we asked around for a live recording engineer everyone said the same thing: Paul Hennerich. We are happy that he was available and enthusiastic to do the project."

(Hennerich is a St. Louis-based engineer who's been doing live sound, recording, and radio broadcasts for the St. Louis Symphony Orchestra since 1993. Some of his other credits include “artists as diverse as Christine Brewer and the Opera Theatre of Saint Louis to the great gravelly voiced Big Bad Smitty and broadcast work for Jazz at the Bistro." He also teaches recording at Webster University.)

How does the schedule lay out, in terms of set-up, soundcheck, test recordings, etc? Will you be playing the same material on both nights? For all four sets?

“As we said, the live experience is paramount to The Wee Trio. So we don't want to sacrifice the experience of the folks coming out for the sake of the record. So we'll play different material on the first and second sets. We will likely repeat a few songs from night to night to get a few takes of them. But we have a lot of material that we love to play so we won't be repeating too much!"

(As regards rehearsal and test recordings, since the band didn't get to St. Louis until Thursday evening, the obvious but unstated answer to that question is that they've got Friday to get things set up and dialed in.)

Will the album consist entirely of recordings from the Bistro, or will there be additional material? If there's more, will it be live or studio, and from where?

“It will be an entirely live album. If it doesn't happen this weekend, it's not making the album! We will likely include some material from previous albums that has evolved into something entirely new since the first time it was recorded. Expect a few Bowie numbers and few choice tunes from Capitol Diner Vols. 1 & 2."

Do you have a name for the album yet? When will it be released, and on what label?

“No name yet. Stay tuned. The record is due out September 1st, 2013. We all grew up on “live at the Bistro" records on the MAXJAZZ label. MAXJAZZ plans pretty far ahead and the band is ready to move forward now. So if we can convince Richard McDonnell to completely disrupt his release schedule, we'd love to put this out on MAXJAZZ! But the current plan is to release it on our faithful, independent, New Orleans label (what more could one ask for in this day and age!), Bionic Records.

Tour dates are currently in the works for the end of 2013 and early 2014. There may also be a few surprise Canadian jazz festivals. Stay tuned for the latest at theweetrio.com."

For more about The Wee Trio, which also includes vibraphonist James Westfall and drummer Jared Schonig, and video samples of some of the material they plan to record this weekend, see this post.