Steve Allee's compositions - and playing - in the spotlight 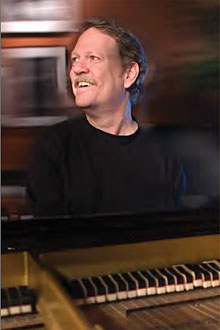 slideshow
Pianist Steve Allee is a musical quadruple threat- as a player, arranger, composer and educator. All four of those roles were on display on Monday, March 26 when he was the featured artist at the University of South Florida in Tampa.

The Indianapolis native, now an assistant professor of music at the University of Cincinnati's College-Conservatory of Music, held a master class for jazz students at USF, then performed Monday night with the excellent USF Jazz Ensemble I, a big band directed by Chuck Owen, and a Faculty Jazz Ensemble.

Allee, a versatile performer who's been a member of bassist Rufus Reid's band for the past decade, has serious compositional chops. His originals are filled with sparkling musical imagery that evokes the visual delights of their inspirations.

The student band, with Allee at the Steinway, performed two of his compositions, the up-tempo “Pure Spirit" and the more idyllic “Dragonfly." They also dug into “Thick and Thin," a composition by saxophonist Gary Campbell, an Indy native who teaches at Florida International University in Miami. The latter was an extended solo feature for tenor saxophonist Jack Wilkins, who directs the USF Jazz Studies Program.

The Faculty Jazz Ensemble portion of the evening was a multi-faceted set that teamed Allee with Wilkins, bassist Mark Neuenschwander and drummer Ric Craig. The quartet performed “Tippin'" from a new Rufus Reid recording, and premiered a new Allee tune, “Hesitation Point." The latter was inspired by a beautiful overlook in Brown County State Park near his country home and studio outside Indianapolis. Then Allee and Wilkins teamed up for a piano-sax duet on “But Not For Me."

Allee's deep solo piano exploration of Thelonious Monk's “Round Midnight" was filled with teasing nuance before he dug into the full melody midway through, and then continued to explore variations built off its chordal structure. The Faculty Jazz Ensemble, buoyed by trumpeter James Suggs and alto saxophonist Jon Cestero, grad students who are section leaders in the student ensemble, closed out the evening with the pianist's “Arts Groove."

Full disclosure: This was my first time to meet and hear Allee in person. However, I talked at length with him by phone 10 years ago when I wrote the liner notes for his recording Dragonfly (Owl Studios). It's a splendid trio session with bassist Bill Moring and drummer Tim Horner, and I've been revisiting it a lot lately.