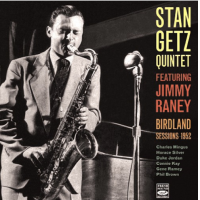 slideshow
Born in Norwalk, Conn., in 1928, pianist Horace Silver found himself leading the house trio at a Hartford club called the Sundown in 1950. That year, the club brought in Stan Getz, and the Silver trio played behind him. Getz liked their feel so much he promised to call them. Yeah, right, they thought.

But two weeks later, Getz did call and hired all three musicians—Silver on piano, Joe Calloway on bass and Walter Bolden on drums. They joined him on the road at Club Harlem in Philadelphia and remained on tour until they recorded together for Roost Records in New York.

This new Stan Getz Quartet recorded for Roost label in December 1950 and March 1951. Then Getz went off to Sweden, where he recorded with Swedish musicians for the Swedish Metronome label. Back in Roost's studio in New York in August '51, Getz called Silver and replaced Calloway and Bolden with guitarist Jimmy Raney, bassist Leonard Gaskin and drummer Roy Haynes.

Tired of not being paid by Getz, who was using Silver's gig paydays to buy heroin, Silver left Getz in June 1952 to record with alto saxophonist Lou Donaldson, bassist Gene Ramey and drummer Art Taylor for Donaldson's New Faces, New Sounds album. The Blue Note release would be hard bop's earliest recording. Silver subsequently signed with Blue Note and the rest is history.

In all, Getz and Silver recorded 18 tracks, a total that includes three songs recorded at New York's Birdland in 1952. The material remains terrific: Tootsie Roll, Strike Up the Band, Imagination, For Stompers Only, Out of Nowhere, 'S Wonderful, Penny, Split Kick, It Might as Well Be Spring, The Best Thing for You, Melody Express, Yvette, Potter's Luck, The Song Is You, Wildwood and the three at Birdland—Potter's Luck, I Can't Get Started and Parker 51. (Silver wrote Penny, Split Kick and Potter's Luck.)

Listening to the material now, you can hear that Getz was energized by Silver's percussive, rhythmic playing. Silver's bebop was singular when compared to traditionalists like Al Haig, who recorded with Getz during this period, too. For example, instead of tearing down the keyboard to open Gigi Gryce's Wildwood, Silver relies on syncopation and pedal tones in chords.

Getz, of course, is beautiful on these tracks. He was lacquer smooth and splendidly lyrical, creating alternate melodies on solos, playing in his soft, sailing style and flawlessly triple-timing runs on solos. In retrospect, it's mystifying that Getz and Silver didn't reunite in later years, at least in concert. Perhaps they did but the result was never recorded. Either way, I suppose one never forgets being cheated.

JazzWax clips: Here are all the Roost tracks...