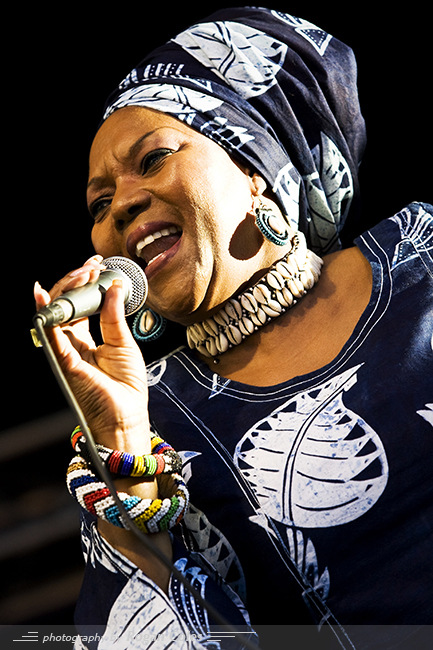 slideshow
As a follow-up to the triumphant Africa Calling, her previous release on Justin Time Records, singer Lorraine Klaasen pays homage to a South African cultural icon and close family friend on A Tribute to Miriam Makeba. “I used to call her auntie Miriam because she and my mother were such close friends and she knew me since I was a little girl,” says Klaasen. “I just wish I could have done this while she was still alive.”

Released in her adopted country of Canada last year, A Tribute to Miriam Makeba was nominated for a prestigious Juno Award (the country’s equivalent of a GRAMMY) in the world music category. The album receives its Stateside release in March, just prior to the April 19 Juno Awards ceremony.

Klaasen’s musical career started at an early age in the 1970′s when she would accompany her mother, renowned jazz singer Thandi Klaasen, to live performances all over Southern Africa including the neighbouring states of Mozambique and Swaziland. It wasn’t long after that she branched out on her own and got into musical theatre which took her across Europe and eventually ended up in Montréal, Canada where she has been living for over two decades.

The vocalist grew up with cherished childhood memories of Makeba, who passed away on November 9, 2008. And though Makeba, affectionately known by her fans as ‘Mama Africa,’ was exiled from South Africa in 1961 when Klaasen was just a little girl, they would have a reunion two decades later at a concert they performed together in Holland in 1987. “I remember she said to me at the time, ‘Oh my goodness! You look exactly like your mum. You’re a photocopy of your mum,’ Klaasen recalls. “Then years later when I told Miriam that I wanted to record some of her songs one day, she gave me her blessing and said, ‘You know, baby, just do it your way. Don’t try to do it my way, do it your way.’ So in this homage to her, I’m keeping my word and doing it my way.”

The Soweto-born singer has been one of the foremost exponents of the classic sound of Township music, which continues to be the most distinctive sound to come out of South Africa. She mines the motherlode of that infectious upbeat music in her moving tribute to ‘Mama Africa,’ who remains a revered figure to the people of South Africa. In a stripped-down setting, accompanied only by Senagalese guitarist Assane Seck (in his very first recording session), Benin-born percussionist Moise Yawo Matey and her longtime bassist Sebastian Andrew Whiteman, Klaasen’s voice rings out with joyous power on six classic Makeba numbers — the popular “Click Song,” which incorporates the Zulu technique of ‘click singing,’ the driving dance number “Jolinkomo” a buoyant medley of “Jikele Maweni” and “Intoyam,” the lilting “Iphindlela” and the 1967 international hit “Pata Pata.” A prolific songwriter herself, Klaasen also contributes three Mbaqanga flavored originals in the brisk romp “Kudala Ndikulindie,” the infectious “Mina Nawe” and the dramatic “Imbizo.” There’s also covers of the tender ballad “Lakutshon Ilanga” and the grooving “Unomeva.”

“My last album featured a larger ensemble backing me,” says the longtime Montreal resident. “But this time we decided to go with just a trio, and the songs stand out that way because the arrangements are not so cluttered.” She adds that she hit on an immediate chemistry with the musicians as soon as they gathered in the studio. “You have to have the right combination of musicians to make the music work in a small setting like that because it’s so revealing. They’re all great musicians and they came in with no preconceived ideas other than to serve the song. And that ultimately was the key to this album — emphasizing the song rather than the arrangement.”

One poignant offering, the autobiographical “Lorraine,” is a song that Klaasen wrote incorporating some of the content from letters that her mother had written to her when she was in her early 20s. It is also the only song on the collection that she sings in English. “It’s in English because those letters that she wrote to me were in English,” says Lorraine. “My mother had a great passion for what she did and I always remember my mum telling me, ‘You got to enjoy what you do. You got to have passion… respect your work, it’s your art.’” Klaasen, who speaks 17 languages, sings in Zulu, Sotho, Xhosa and Lingala throughout the rest of the album.

While Miriam Makeba was well-known to U.S. audiences during the ’60s and ’70s for her concerts and recordings with Harry Belafonte and her TV appearances on The Ed Sullivan Show, it was her participation in Paul Simon’s groundbreaking Graceland album in 1987 that introduced her to a new generation of Stateside audiences. To mark the 25th anniversary of that world music landmark, the Joe Berlinger film Under African Skies was released, which documented the making of Graceland and subsequent world tour with Makeba as a featured special guest. The tour culminated in a historic show in South Africa before a mixed race audience, which fueled further resistance to the apartheid regime of South Africa.