Party to World Class Jazz, from funky to classic to world & everything in between. Our performers are coming from England, Holland and across the USA. Savor craft brew and great eats 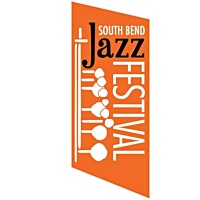 Party to World Class Jazz, from funky to classic to world & everything in between. Our performers are coming from England, Holland and across the USA. Savor craft brew and great eats!

Welcome to the 7th Annual South Bend Jazz Festival, being held outside, on the island at the Century Center or inside the Great Hall, if weather dictates.

For over 7 years, we aimed to build a world class Jazz and Music Festival right here in our own hometown of South Bend, Indiana. We started outside the Morris Center, seven years ago at Jon Hunt Plaza. Two years ago we moved to the Century Center after their generous offer to partner with us.

This will be a fun event where you can meet your friends, make new ones, while also enjoying the breathtaking view of the St. Joseph River; while hearing exciting music you haven't seen before, sample tantalizing food and brew!

From 5pm till 11pm on Friday, enjoy our artists, chosen for their talent and energy to keep the party going and dazzle the jazz and music enthusiast. This evening has a local emphasis as we present the Clay High School Band, Clay High School Jazz Choir, Notre Dame Jazz Band and the South Bend Jazz Festival All Stars, with musical director Kevin Scott Joiner and: GABRIEL HERNANDEZ, KEITH EMERSON, BRENDAN CANE, ANNA MILES, LEONARDO CARDOZO, PRISCILLA PHILLIPS and JACQUODA. On Saturday, we start at 5:00 p.m. and continue to party till 11:00 p.m. After, we move to Vegetable Buddies (two blocks away from Century Center) for the festival jam session starting at 11pm and going till the wee hours.

Foster/Tidaback/Turner will be bringing new music and arrangements to great classic standards you will remember from your lifetime. Look for great solos and compositions. Featuring Billy Foster, Darrel Tidaback, Turner, Don Lerman, and Carl Coan.

Dutch duo Bastian Steven (vocals) and guitar wonder (voted best guitarist in Holland) Niels Onstenk are coming from The Netherlands, performing music from both their albums. We are in for a Dutch Treat!

Legendary producer and performer, Norman Connors graces us with his special way of performing Rhythm and blues/jazz and pop to South Bend. He is bringing his talented band to play his monster R&B and Jazz hits that have appeared on the Billboard chart over the last 40 years, as well as new songs from fall release concentrating on his 40 year celebration in the field of music.

Danny Lerman His latest appearances have taken him to the Jakarta Jazz Festival; solo concerts in Bali and Holland; an appearance with international dance artist CeCe Peniston; Danny will perform new music inspired by his latest travels, from his upcoming album at the festival.

At 11pm till 3:00 am; Saturday eve, come and Party with us at the Festival Jam Session hosted by and performing, Sam Que at Vegetable Buddies, 129 N Michigan St, South Bend, IN (free for festival attendees, others pay just $5)

You can purchase a ticket for both nights for $25.