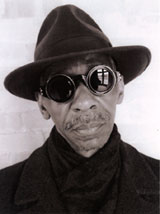 SASSAS is pleased to present two towering figures in modern jazz, Roscoe Mitchell and Joseph Jarman, in a rare duo, on Sunday October 8 as a part of “sound." at the Ford Amphitheatre. As founding members of the legendary jazz collective the Art Ensemble of Chicago, these veteran multi-instrumentalists last performed together in Los Angeles as a part of the Ensemble in the mid-1970's. For this exclusive performance at the Ford Ampitheatre, they make their first appearance in Los Angeles as a duo, swapping solo sets and playing together.

The music created by Mitchell and Jarman appeals to fans of jazz, modern classical composition, modern American music, spiritual music, American primitive music, and Afro-centric music. In the book “Great Black Music: Ancient to the Future," author Lincoln T. Beauchamp, Jr. describes how the Art Ensemble of Chicago encompasses all forms of Black artistic expression and communication, from ancient rites and rituals to sanctified pulpits; from the language of drums to rap; from la Conga to the Jitter-Bug.

Listeners can expect a live experience with the musicians utilizing many different instruments: Mitchell's main instrument is the saxophone, and also plays clarinet, flute, piccolo, oboe, baritone and bass saxophones. Jarman is also a saxophonist and a multi-instrumentalist who plays woodwinds and many percussion instruments, including vibes, marimba, balophone, and an array of bells, gongs and little instruments. He also incorporates voice with these instruments.

Mitchell and Jarman's musical lineage stretches back to the beginnings of free jazz via the Art Ensemble of Chicago (along with Lester Bowie and Malachi Favors), and before that as founders of the highly influential AACM (the Association for the Advancement of Creative Musicians) in 1965. The AACM can count internationally known jazz musicians Anthony Braxton, Henry Threadgill, Wadada Leo Smith, and Muhal Richard Abrams as former members, among others.

“The Art Ensemble was unquestionably a groundbreaking band. In the late '60s and early '70s, the Art Ensemble helped pioneer the fusion of jazz with European art music and indigenous African musics." - All Music Guide

Both Mitchell and Jarman have remained vital forces in music through their solo performance, composition, and improvisation, placing them at the vanguard of not only jazz, but of modern music.

In 2004, Mitchell released “Solo 3," an ambitious 3 CD set of solo saxophone and percussion works. About Mitchell's work Mathew Sumera of the Jazz and improvised music webzine One Final Note wrote, “Mitchell's sound world is one of heterogeneous homogeneity. It is not that he lacks the ability to strive toward a unified statement; again, he simply chooses not to. Unity can just as easily be achieved without compromise, without modifying the personality of a single statement--simply place one against the other. It is not some sort of smashed, forced, postmodern sensibility. It is a commitment to the fact that sounds exist together. We hear simultaneity."

Joseph Jarman's work takes in a wide variety of influences, including jazz, western music (especially Webern and John Cage), Asian music and theater and African music. Because of his collaborative work with poets, dancers and other artists, he is sometimes called the first “multi-media" jazz musician. In 1990, Jarman was ordained a Jodo Shinshu Buddhist priest. His devotion to Asian philosophy and meditation has brought much to his musicianship, especially the values of breath and silence. Jarman summarizes the many strands of his experience as an interest in “the sound of the universe." He last performed in Los Angeles in 2003 as a part of sound. at the Schindler House in an evening of solo works and in a trio with legendary bassist Henry Grimes and percussionist Alex Cline.

For further information about “sound. at the Ford Amphitheatre: Roscoe Mitchell and Joseph Jarman," the public may visit www.soundnet.org or phone (323) 960-5723.

The Ford Amphitheatre is located at 2580 Cahuenga Blvd. East, Hollywood, CA 90068, just off the 101 Hollywood Freeway across from the Hollywood Bowl and south of Universal Studios. The grounds open two hours before show time for picnicking.

The Ford offers a number of dining options: a variety of food and beverages is available on site and box dinners for evening events may be ordered in advance. Patrons are welcome to bring their own food and drink. The Ford is disabled accessible. Portable wireless listening devices are available upon request.

On-site, stacked parking costs $5 per vehicle for evening shows. For evening shows only, FREE nonstacked parking serviced by a FREE shuttle to the Ford is available at the Universal City Metro Station lot at Lankershim Blvd. and Campo de Cahuenga. The shuttle, which cycles every 15-20 minutes, stops in the “kiss and ride" area.

For a complete season schedule, directions to the theater and parking information, log on to www.FordAmphitheatre.org.

sound. is a project of The Society for the Activation of Social Space through Art and Sound (SASSAS) and is supported in part through grants from the Department of Cultural Affairs, City of Los Angeles, the Foundation for Contemporary Arts, the Los Angeles County Board of Supervisors through the Los Angeles County Arts Commission, the West Hollywood Arts and Cultural Affairs Commission, a special donation from Amoeba Music, and the generous contributions of our members.