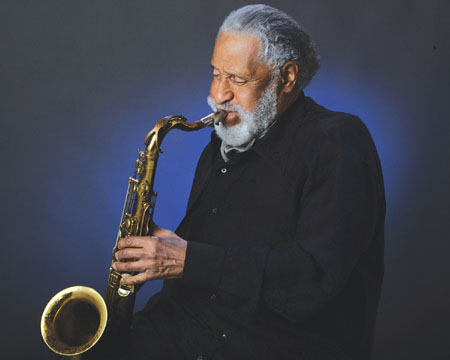 slideshow
Tenor saxophonist Sonny Rollins and his band will perform a special benefit concert for Hudson River Sloop Clearwater on Sunday, December 6, 2009 at the Tarrytown Music Hall in Tarrytown, NY. The concert will begin at 2:00 pm.

Rollins's performance in Tarrytown on behalf of Pete Seeger's Clearwater will mark the first time the renowned environmental organization has ever hosted a benefit concert dedicated solely to jazz, and is also the first time that the saxophonist has performed a fund-raiser for any cause. The concert, to be presented by Jazz Forum Arts, is Rollins's only 2009 New York area appearance.

Performing with Sonny Rollins will be his working band: Clifton Anderson, trombone; Bobby Broom, guitar; Bob Cranshaw, bass; Kobie Watkins, drums; and Victor See-Yuen, percussion. Tickets for the concert range from $75 to $100; a limited number of premium tickets (which include a reception with Rollins) are also available. For information and ticket purchases, visit www.tarrytownmusichall.org or call 877-840-0457. The theater is located at 13 Main Street, Tarrytown.

In 1998 Sonny Rollins, for years an ardent environmentalist, released an album called Global Warming, which included songs such as “Echo-Side Blue," “Mother Nature's Blues," “Clear-Cut Boogie," and the title track, which he frequently performs to this day. The CD package contained a poem by Rollins, reading in part: “We got to stop assumin' / We can just go on consumin' . . . Live light on the planet, sister and brother / 'Cause if we kill it, there ain't no other / Not that much time left neither."

“My views have changed a little bit since then," says Rollins. “I still agree that people should be more aware of the environment and their own personal habits--like throwing stuff out of the window. Overall I see the environmental crisis less as 'us versus them' and more as part of the big picture. It's okay in a way. But people still have to take action. It doesn't affect what we should be doing. It's more of a moral question. Being against the environment is being against yourself and your neighbor."

Rollins has resided since 1972 in an old farmhouse in Columbia County, New York, in the Hudson River Valley. He eagerly accepted the opportunity to lend his talents for an organization founded in 1969 by another Hudson Valley musical icon and environmentalist. “Pete Seeger and I have the same heroes and beliefs," says Rollins. “We are in the same family. He is my brother."

Presently in the midst of an eight-city European tour--which takes in Groningen, Toulouse, Paris, Milan, Zagreb, Salzburg, Rome, and London--Rollins is also scheduled to perform at the Kennedy Center in Washington, DC on 12/2. While in Salzburg (11/8), he will be awarded the Austrian Cross of Honor for Science and Art, First Class. The award is one of Austria's highest honors, given to leading international figures for distinguished achievements. The only other American artists who have received this recognition are Frank Sinatra and Jessye Norman.

In other news, a Sonny Rollins iPhone App (http://www.tinyurl.com/sonnyrollinsapp) has just been launched. The app, developed by Rollins's video producer and webmaster Bret Primack, is a mini-website where users can access Sonny's music, videos, and concerts tickets. “Once the free App is downloaded from iTunes," says Primack, “it's very easy to sample and purchase the music, from any location."

Rollins's web site has been offering special packages on MP3s, lead sheets, and solo transcriptions for all of the songs on his two Doxy CDs, Road Shows, vol. 1 and Sonny, Please--the first time an artist's web site and label have made such packages available.

Finally, Sonny is looking ahead to his next recording, which will be a studio date and “will probably not be with my working group," he says. “Maybe a trio." He intends to release the CD in the summer or fall of 2010, in conjunction with a special New York concert around his September 7 birthday.