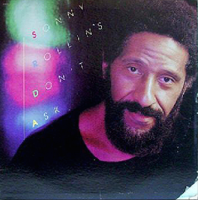 slideshow
In May 1979, Sonny Rollins recorded his composition Disco Monk at the Berkeley, Calif., studio of Milestone Records for his album, Don't Ask. Two months later, Sonny performed the song at the Pori Jazz Festival, held at the Riihiketo School in Pori, Finland. Now the live version of Disco Monk appears for the first time on Sonny's new album of concert performances: Holding the Stage: Road Shows Vol. 4 (Doxy). The little-heard song on stage is a masterpiece, combining a disco feel with ballad passages featuring the modernism of Thelonious Monk. I can't get enough of it, especially Sonny's solos.

Last fall, Sonny and I spoke by phone as he was choosing material for his new album. We talk every few months about a wide range of things—"life," as Sonny likes to say. It's always a revelation to talk at length with Sonny. His outlook on life is exuberant and deeply philosophical. He makes me think. We also talked about the difficulty he was having making final selections for the new album. Sonny was torn between “the stuff that purists want to hear" and what he wanted to share. Sonny has never been comfortable hearing himself play on recordings, so the process was especially trying for him. At one point, he asked what I thought. I told Sonny to go with his heart, to make choices based on what felt good inside and not worry about the purists.

Last night, I called Sonny to tell him how much I love Disco Monk, why it's a critical work and how remarkable it was that he was able to unite a pop feel with the spirit of Monk's arch approach. Here's what Sonny had to say about the song:

“I had been experimenting alone with the song, so when my band and I were preparing to record Don't Ask in 1979, we rehearsed Disco Monk. I didn't think it out. I just heard the song musically. Disco was everywhere back then. You couldn't escape it. As you know, I love all kinds of music, so we started playing with a soulful disco feel and heard Monk in there. I wanted people to know that there's something out there than just disco. Disco and Monk were supposed to be at two opposite ends of the spectrum. On one end, you had disco that was called superficial by jazz fans and on the other you had music that was considered far out bu disco fans. I wanted to bring them together—to show jazz fans that disco can be beautiful and to show people who loved disco that Thelonious Monk was important and worthy. You know, disco's great but here's Monk, that it's all one in the sense that all good music is one. People who liked disco might not have heard of Monk, and Monk fans might not have thought much of disco. By bringing the two together, I wanted to find something new in their togetherness, that there's unity in their dispirit forms. That's what I was seeking. That's just the way I think, so the song was perfect for me.

“I didn't play that piece often in performance. Purists often misinterpreted what I was trying to do with it. People who came to my concerts wanted to hear what they knew and weren't ready to hear me play disco. I guess some thought I was selling out, that I was trying to record a disco hit. That had nothing to do with it. I wanted to show that the two forms were both great and could work together. I think my new Road Shows album has a lot of that—showing all the different things Sonny Rollins could do." Sonny paused and laughed.