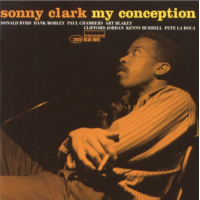 It's hard to pick a favorite among these albums, just as it's hard to isolate a Clark recording as superior to all of his other collaborations and leadership sessions. Clark was soulful and elegant on everything he recorded. But there's something special about the Clark-Mobley material, especially on My Conception. Strangely, the album was shelved by Blue Note in 1959 and wasn't released until 1979, when the material first appeared on vinyl in Japan. The quintet included Donald Byrd (tp) Hank Mobley (ts) Sonny Clark (p) Paul Chambers (b) and Art Blakey (d).

Mobley's sound is determined and elastic, like stretched taffy, and Clark plays with tenacity and grace. In addition to the Mobley-Clark conversation, Byrd's trumpet sizzles, Chambers's bass is thick and rubbery, and Blakey's drums are taut and thrashing. Together, the group is completely in sync, working as one but leaving each other space to be heard and to solo. Also remarkable is that fact that all of the songs on the album are Clark originals, reminding the listener of his gifts as a hard-bop composer.

As Clark says in Michael Cuscuna's liner notes from 1980, “I never heard Hank Mobley in person until I came to New York, but I listened to his records with the Jazz Messengers and dug him very much. [He] plays in my style and I was very happy working with [him] and very satisfied with the results."