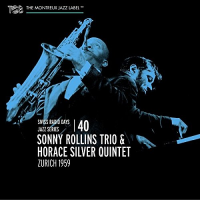 slideshow
On Thursday, March 5, 1959, the Sonny Rollins Trio and the Horace Silver Quintet were in Zurich on a joint European tour. Interestingly, Sonny and Silver were at different points in their careers. Silver had yet to crest and would record the fiery Blowin' the Blues Away in August before riding his funk piano style into the 1960s. Sonny, by contrast, had grown frustrated with his approach on the tenor saxophonist. He feared he was growing too conventional and staid at a time when other saxophonists such as John Coltrane and Ornette Coleman were on the cusp of a more spiritual and freer jazz form.

When Sonny returned to the States later that spring, he began a sabbatical in the summer that would last until late 1961. During that time, he could be found practicing tirelessly on New York's Williamsburg Bridge, finding solace and energy in the air and sky. While jazz fans would later find Sonny's mid-river retreat romantic, Sonny viewed it as a necessary and grueling pursuit, akin to an athlete attempting to develop a new level of endurance superior to that of rival players.

In fact, three days before Sonny arrived in Zurich with Silver, Miles Davis had recorded three tracks for Kind of Blue—Freddie the Freeloader, So What and Blue in Green. While Sonny could not have known what was recorded at Columbia's 30th Street Studio, Kind of Blue's release in August surely was another modernist straw that convinced Sonny an artistic hiatus was necessary. Silver, by contrast, who relied much less on songbook standards than Sonny and more on his own steady stream of hard-bop originals, was on a roll.

That March, the two groups were together in Zurich, with Silver opening for Sonny. At some point during the 5th, the groups wound up at a radio station to use the studios. It's unclear whether this was to record or to rehearse for an upcoming concert. Fortunately, someone flipped on the tape recorder, and their sets were captured. The result was The Sonny Rollins Trio & Horace Silver Quintet: Zurich 1959, part of the Swiss Radio Days Jazz Series. This album is now available on CD thanks to the Naxos label.

Sonny's set opens with I Remember You and is followed by I've Told Every Little Star, It Could Happen to You, Oleo and Will You Still Be Mine? What's fascinating here is that you can hear Sonny's frustration. While his tone is muscular and his runs on the tenor sax are fluid, he seems to be roaming around in search of himself and a groove. Joining him were Henry Grimes on bass and Pete La Roca on drums. Listening to The Bridge, his first album in early 1962 following his self-imposed exile, you hear remarkable contrasts. After his break, you hear a freer attack on Sonny's part and new level of control and originality.

Silver's set is refreshing and strong. His quintet in 1959 featured trumpeter Blue Mitchell, tenor saxophonist Junior Cook, bassist Gene Taylor and drummer Louis Hayes. This was an extraordinary group on every level. They were tight, hip, lyrical and soulful. The tracks are Nica's Dream, Cool Eyes, Shirl (just the trio), Ecaroh and Senior Blues. Nica's Dream here marks the first time Silver recorded the original as a leader. The earlier version was for Columbia while Silver was a member of the Jazz Messengers in 1956.

Perhaps the albums high points are Ecaroh, taken at a faster tempo than the earlier version, and Shirl, a ballad with the horns out. It tops Silver's earlier version in 1956 on 6 Pieces of Silver and is a reminder how sensual and moody Silver could be on original piano ballads. Shirl is matched only by Lonely Woman from Song From My Father (1964).

The CD's fidelity is crystal clear and provides us with what can only be called two studio albums recorded abroad—one by Sonny Rollins, who was winding down his 1950s phase, and another by Horace Silver, who was just getting started. A breathtaking snapshot of two of jazz's greatest artists at turning points.